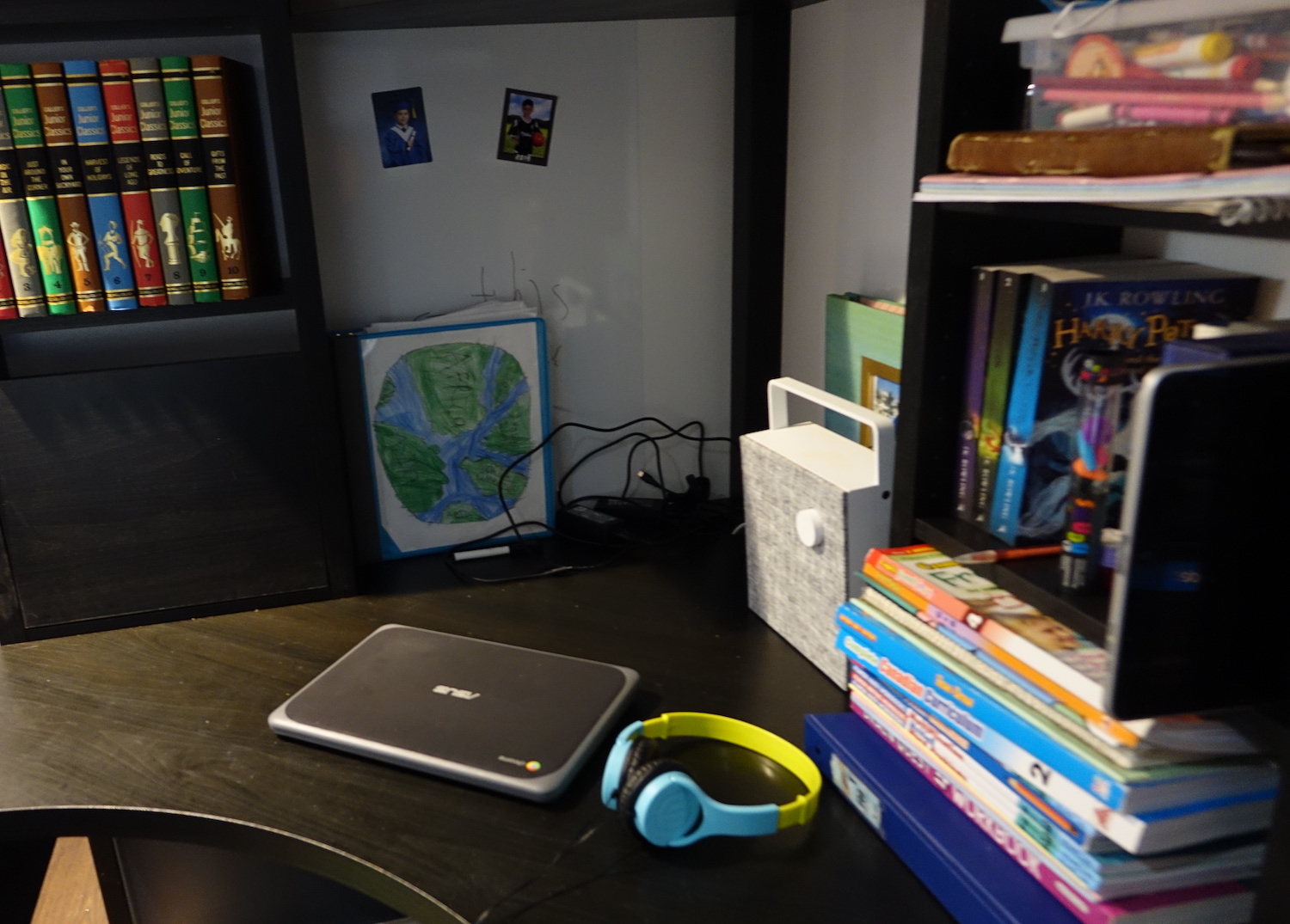 When any friend or family member comes to me asking if they should get their young child a laptop and if so, what kind, my answer is always the same: yes, and a Chromebook. These handy and lightweight computers are perfect for students, but great for business users as well. Depending on what you need it for, some business owners, individuals who work-from-home, or those who travel often, might be perfect candidates for a portable Chromebook as a primary or secondary computer.

Over the past few weeks, I had the opportunity to try out the ultra-portable Asus C202 Chromebook. I also commissioned my 8-year-old son to help with the testing, using it for his distance learning tasks.

Here’s a look at the Chromebook, its features, and my take.

Specs of the ASUS C202 Chromebook

First, let’s look at the Chromebook itself. This isn’t a traditionally sized laptop computer: it’s as small as a large tablet with an 11.6″ 1,366 x 768 HD resolution screen but opens up like a miniature laptop.

It has reinforced rubber at all four edges that can help reduce impact in case it accidentally falls or is dropped or bumps against something. There are also grips on the sides that make it easy to hold it securely while walking around. It has been drop-tested from as high up as 3.9 feet, so needless to say, it can take a beating. It also has a spill-proof keyboard which is a relief in case your kids spill something on it, or your water bottle accidentally tips over one rough morning. 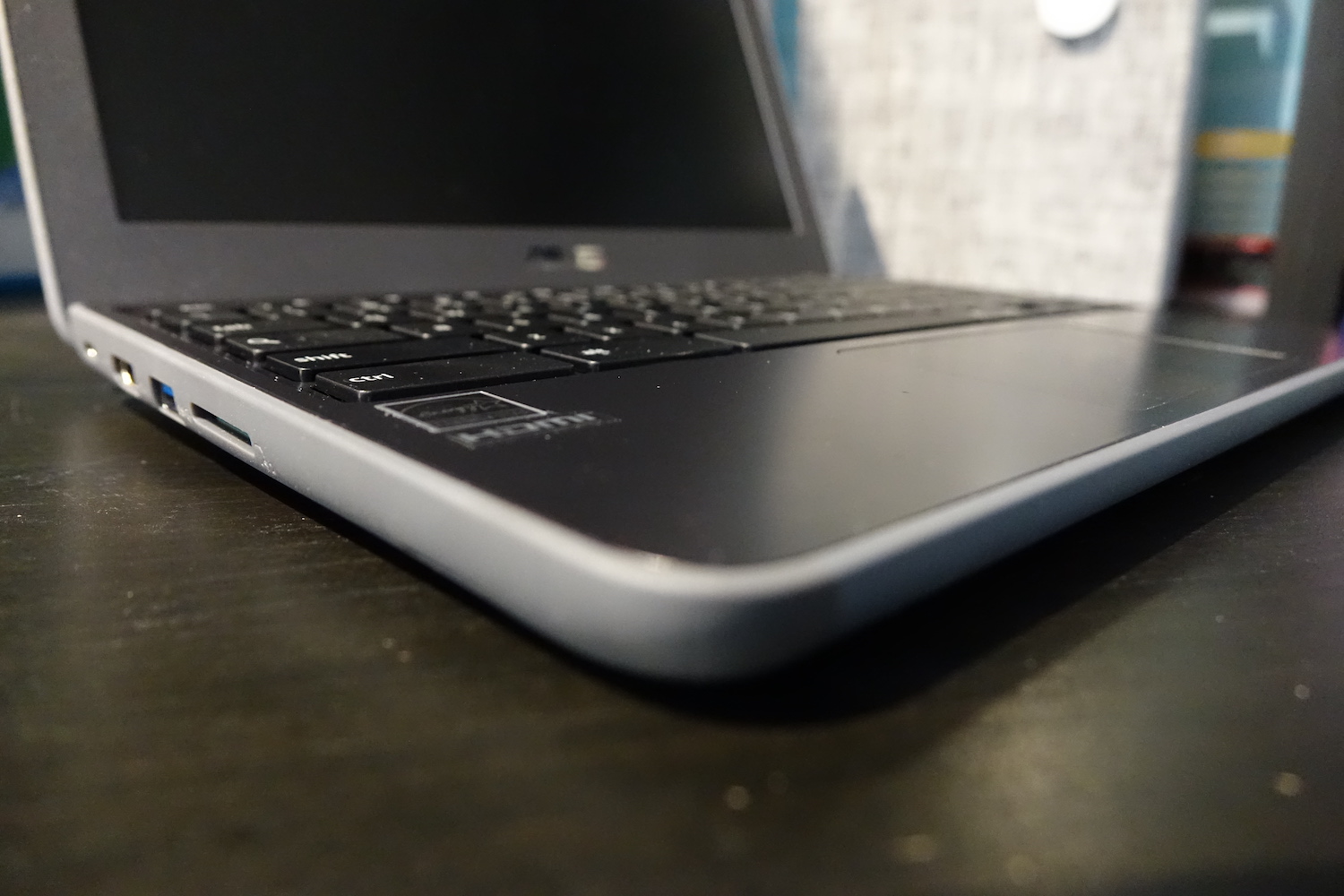 It can be used in two ways: as a traditional laptop in an “L” shape or laid down flat using the 180-degree hinge, which is good for watching a video with someone else or sharing spreadsheets or other documents with a co-workers or client. However, it does not have a touch-enabled screen. The screen is, however, anti-glare so you can work comfortably in direct sunlight, such as by the pool at the hotel or in your backyard, without issue that you won’t be able to see properly. 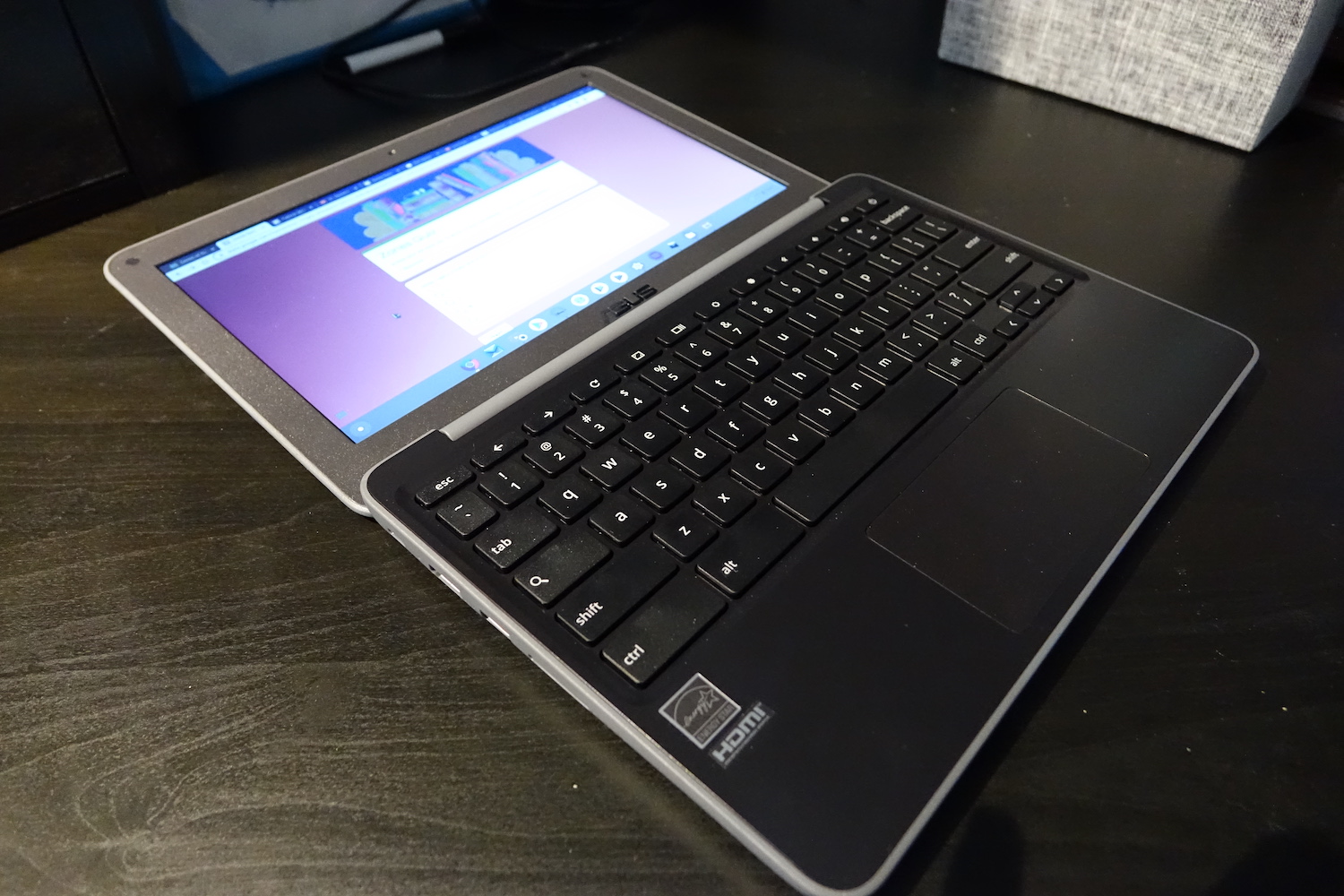 The keys feature a 2mm travel distance between them, which is said to offer a “better feel” and more accurate typing. The keys also have writing that is 15% larger than what you might find on other similar computers, which might be a lifesaver for young children or those with vision problems.

It has a 360-degree Wi-Fi antenna and offers an up to 10-hour battery life, which is sufficient for an entire workday or day of school studies, and comforting if you take it while traveling since you can likely use it through an entire flight without having to plug in.

It has an Intel Celeron dual-core N3030 processor, 1.6GHz, 2GB on board memory, and 16GB eMMC storage, and comes equipped with an HD webcam, built-in Bluetooth, 2-watt stereo speakers, and a microphone. Ports include a 3-in-1 card reader that can accept SD, SDHC, and SDXC memory cards, an audio jack, two Type-A USB 3.0 ports, and one HDMI port. 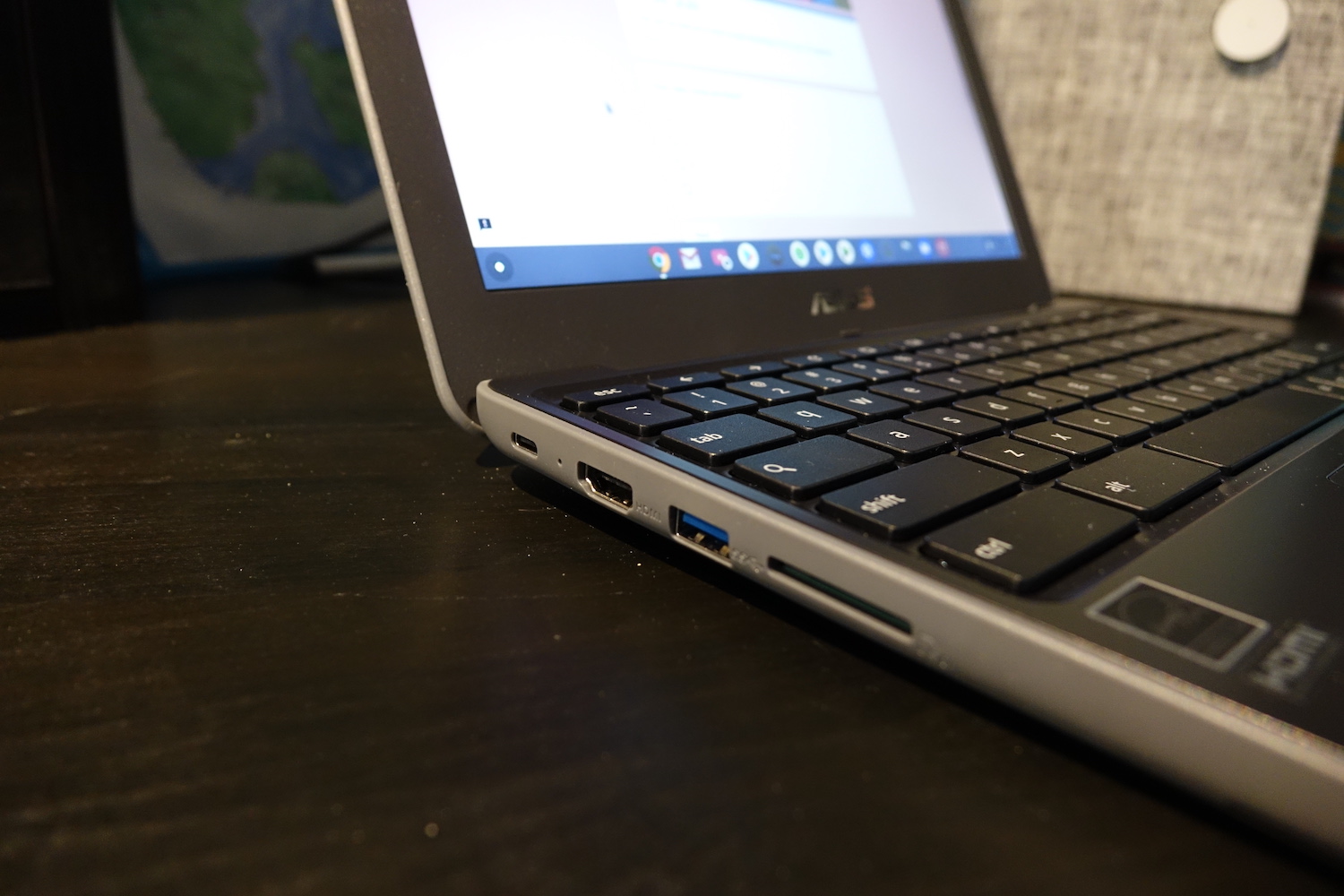 Weighing just 1.2 kg with the battery, it’s super lightweight to take with you virtually anywhere. You can access the Google Play Store for everything from video streaming apps to games, messaging apps, and more. You can access Google programs like Docs, Slides, and Sheets for productivity, as well as ones like Google Duo for video calls, Gmail for e-mail, and more. You can also program the computer to recognize your voice so at any time you can say “Hey Google” and give a audible command or ask a question.

Evaluation of the ASUS C202 Chromebook

The first thing you notice when taking this Chromebook out of the box is how sleek, compact, and downright adorable it is. This certainly falls into the “ultra-compact” designation when it comes to Chromebooks. It’s the perfect computer to throw into a backpack, briefcase, or even a large purse and bring with you. It won’t add much weight and it’s easy to carry around.

The reinforced rubber makes it easy to grip, which was ideal for my 8-year-old – I didn’t worry about him accidentally dropping it or knocking it about.

Setting up the computer was pretty standard, similar to the set-up process for any other Chromebook. We set it up using my son’s Google account, then subsequently also signed into his Google Classroom account for distance learning schoolwork. 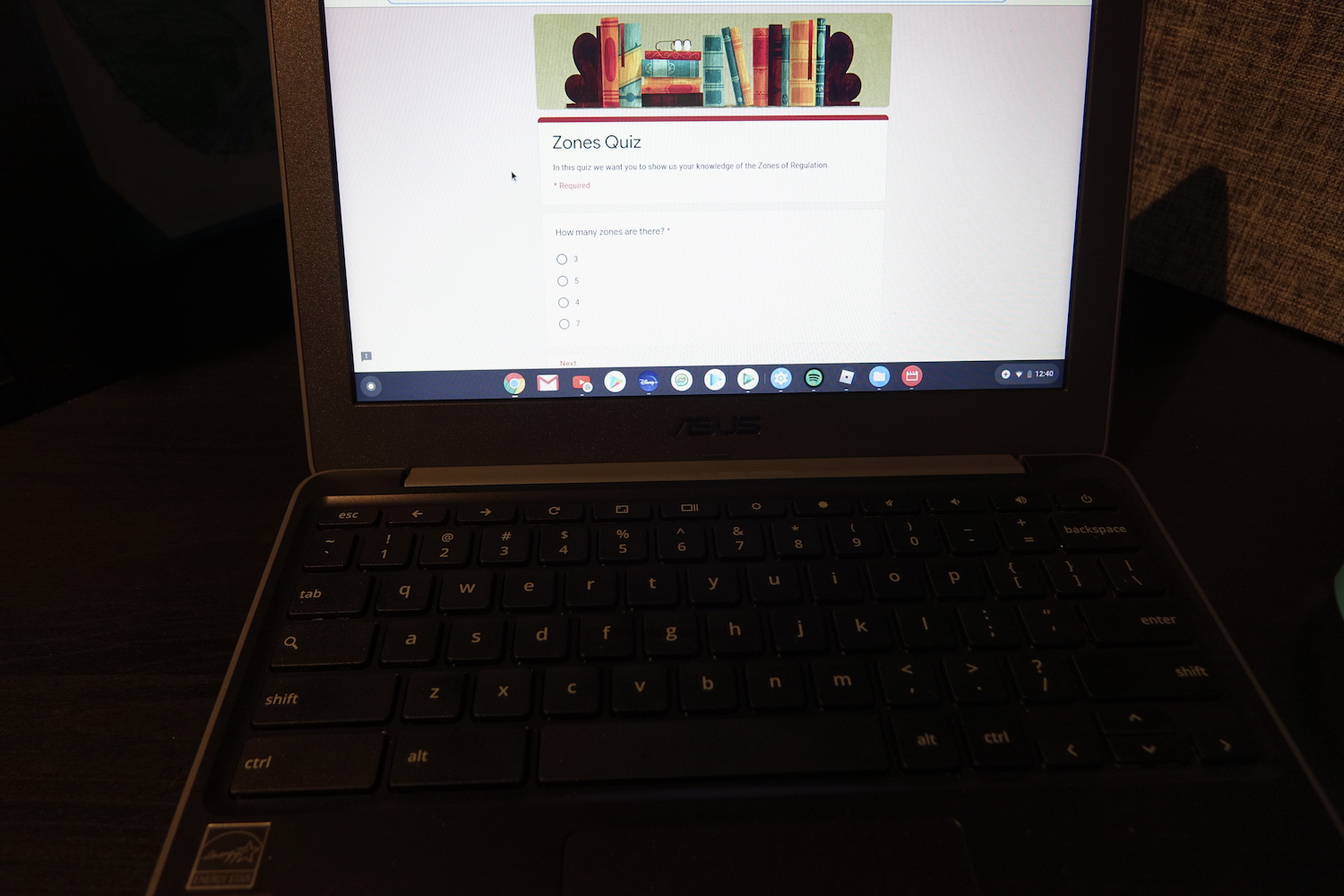 Throughout the time we had it, we used Google Classroom, Google Duo for weekly video chats with his teacher, and Google Play to download apps like Disney+, Messenger for Kids, Roblox, and Spotify. We also extensively used to Google Chrome browser to do things like access videos on YouTube, educational apps like StudyLadder.ca and Kidsa-z.com, and research projects. He also used Google programs like Docs, Sheets, and Slides to complete schoolwork. 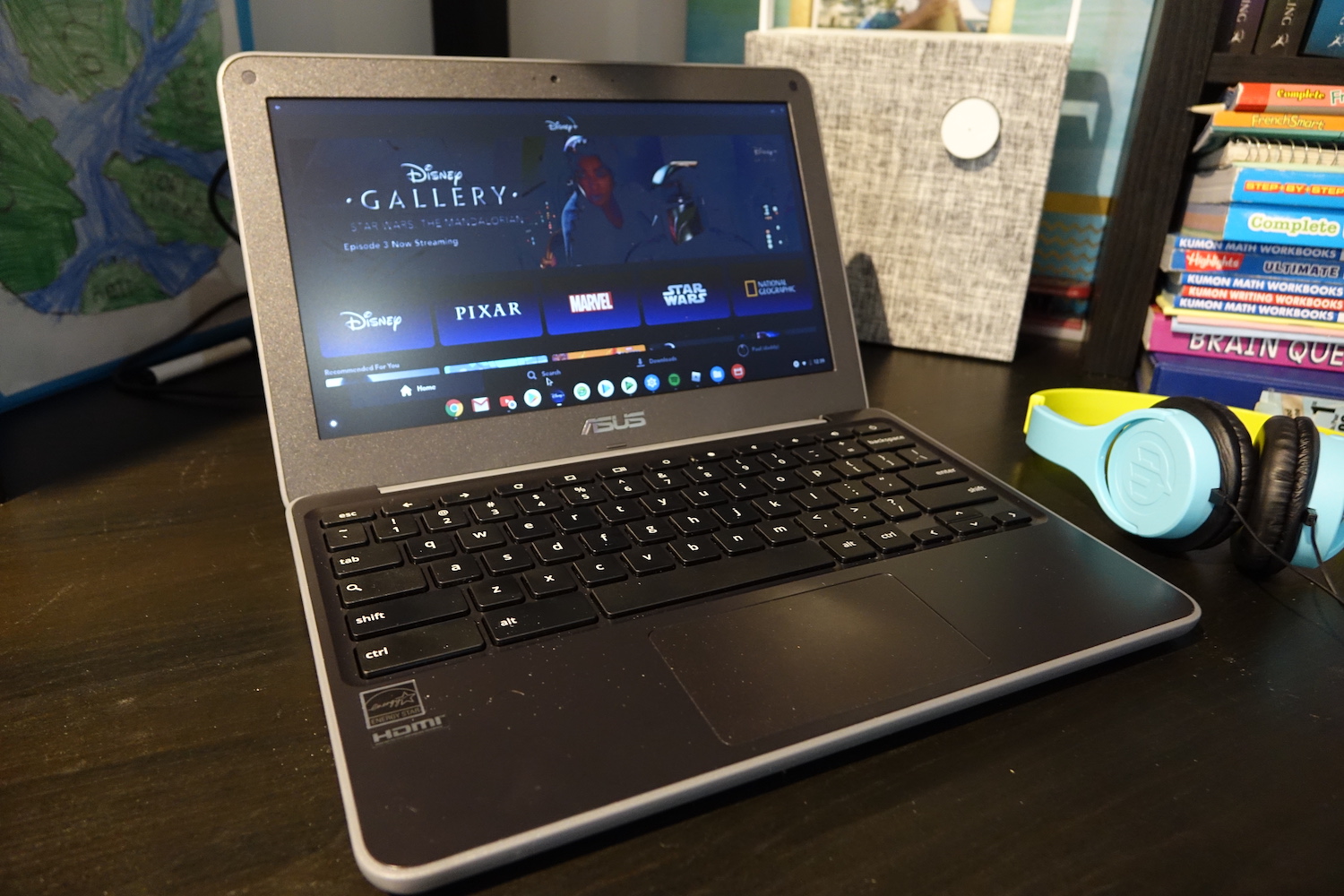 There were two features we longed to have in this Chromebook: a fully rotatable screen and a touchscreen. A Chromebook of such a small size screams for both of these features, considering that it looks so much like a tablet. Because it had neither of these features, my son enjoyed using this Chromebook for schoolwork and video chats with friends but not for gaming. It’s unfortunate this Chromebook doesn’t include a touchscreen and screen that can rotate to sit flat like a tablet. But that is also reflected in the price – models with convertible screens typically cost quite a bit more. That said, this makes this Chromebook more appealing for productivity than for fun.

The ASUS C202 Chromebook has a webcam and mic for video chats, both of which worked well. He also listened to streaming music from the computer, connected via Bluetooth to a portable Bluetooth speaker on his desk. He also frequently used his headphones, which plug right into the convenient 3.5mm port. 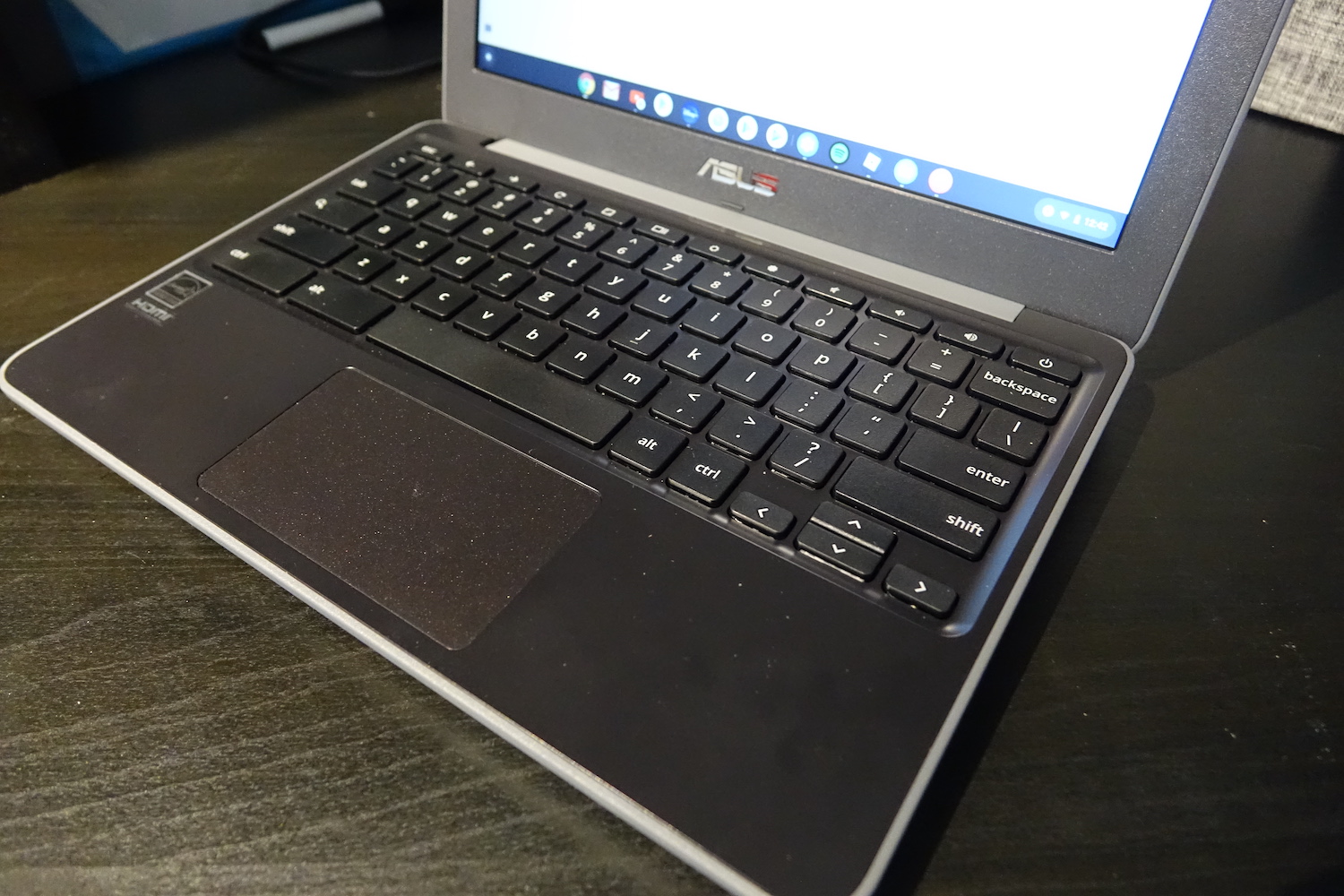 Battery life is as promised, lasting for a full work day (and play), leaving to charge overnight if necessary.

Connecting a printer was simple: I plugged my Epson EcoTank ET-4450 into the USB port of the computer, saved the printer, then tapped print on a document and it printed without a hitch.

Screen resolution leaves a bit to be desired, with colours that don’t really “pop.” But for watching the occasional video or movies and TV shows on the go while traveling, surfing the web, and accessing documents and files, that might be a worthwhile sacrifice for the sake of ultimate portability. That said, if you’re used to an HD screen at home or on your full-sized laptop, you’ll notice the difference when watching on this screen.

Note that if you want to use parental controls when setting up this, or any other Chromebook for a child, set it up as a Family Link account, connected to your Google account, where you can manage how your child uses the device remotely and/or from your own devices.

If you’re looking for a secondary computer beyond a MacBook or Windows computer you already have that you can use on the go while traveling to keep track of things like spreadsheets, compose documents, review files, make invoices, access the Web, and more, this is a great option. You can leave your heavier, more expensive laptop at home, save everything in Google Drive (or on a flash drive or SD card) and use this one as your travel device. It also works great as a portable computer for kids given its rugged design, spill-proof keyboard, great battery life, and portability. It’s sufficient enough for them to access educational apps and programs like Google Classroom and get their work done without issue.

You can watch movies and play games but the video quality isn’t the best. And without a touch screen or the ability to flip the screen back, there are better Chromebooks that will appeal more to those who want one for entertainment use, like gaming. 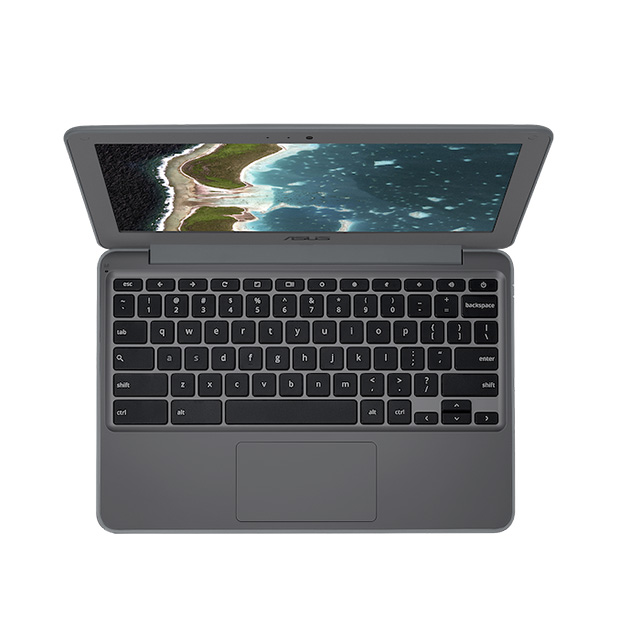 As a productivity tool, the Asus C202 Chromebook is a great option. If the kids have a tablet as well they can revert to for gaming, it’s a great option they can use exclusively for schoolwork without too many distractions.

If you want an all-in-one device that you can use for both entertainment and productivity and you’re willing to pay a bit more, consider the ASUS Chromebook Flip C434 instead, which has a larger 14″ screen but is still relatively compact with a gorgeous display, touch-enabled screen, and a fully convertible design. It’s slimmer and sleeker, though, not as ruggedly built as the C202. But if you wouldn’t really make use of the flip and touchscreen functionality, and can make do with the 1,366 x 768 resolution screen, the Asus C202 is a really affordable and functional option that is worth considering.