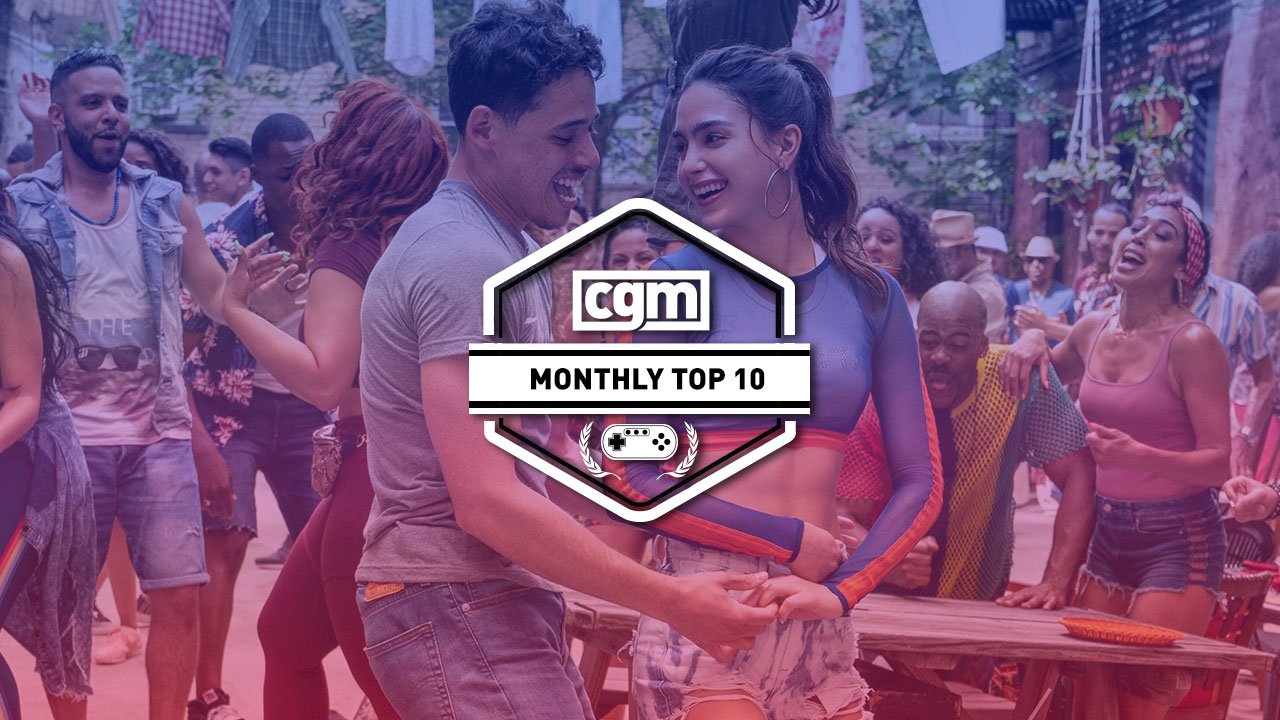 Each month CGM writers get the chance to review the latest and greatest tech, toys, games and media. At the end of each month we round up the ten highest scoring reviews to show our readers what gear and games we can stand behind with confidence! From our CGM Family to yours, we want to ensure you never miss the top reviews to help you make informed choices on all your media and gear!

“In The Heights, based on Lin-Manuel Miranda’s hit Broadway musical, is not only Chu’s best work, but the best film of the year so far, giving theatre-hungry audiences pure movie magic that cannot be experienced anywhere else but on the biggest screen possible.” Here is CGMs review of In The Heights.

Final Thoughts: In The Heights reminds us what the big screen is made of, offering a visually vibrant musical to be experienced collectively on the biggest screen imaginable.

Final Thoughts: The JBL Pulse 4 Portable Bluetooth Speaker carries a steep price tag, but after using it, I’m going back to buy another.

“BuddyPhones seems to have thought of everything they could to meet the needs of small children. These headphones are durable, comfortable, cute, and extremely functional. They come with extra bells and whistles that, as a parent, I didn’t even know we needed.” Here is CGMs review of the ONANOFF BuddyPhones Play+ Headphones.

Final Thoughts: ONANOFF hit the mark with the BuddyPhones Play+ headphones. They are a great balance between quality and safety for my children and the warranty is an added bonus for peace of mind.

Final Thoughts: If you’re in the market for a Thunderbolt charger that has built-in RGB lighting, then the Razer Thunderbolt 4 Dock Chroma is for you!

“If it wasn’t already abundantly clear, the MSI Ge76 Raider is a monster of a machine, and therefore aptly ships with an equally beefy battery, which from my real-time usage test lasted an impressive five and half hours with some light gaming and video streaming.” Here is CGMs review of the MSI GE76 Raider.

Final Thoughts: Ultimately, the MSI GE76 Raider is a robust and fully featured laptop, one which can easily handle heavy work and gaming sessions, making it an ideal desktop replacement or, at the very least, a dedicated gaming machine with portability in mind.

“Rift Apart’s side content feels fun and engaging while distinct enough to spice things up between the more typical Ratchet and Rivet levels. Rivet and Kit, Ratchet & Clank’s dimensional counterparts go beyond a mere gender-bending model swap, at least when it comes to their identities, with Rivet embellishing her Rosie the Riveter inspired design in a character that feels strong-willed and fierce. In contrast, Kit like Clank, feels meek but determined, making her more than just a compliment to Clank.” Here is CGMs review of Ratchet & Clank: Rift Apart.

Final Thoughts: With over a dozen games in the long-running series, Ratchet & Clank: Rift Apart still manages to feel fresh and exciting, taking full advantage of the PlayStation 5 by delivering what, for many, may be their first taste at a definitive next-gen feeling game for the still-budding platform.

“Loki will feature a full look into time travel in the MCU with the Time Variance Authority joining the story, and it’s safe to say it will keep things interesting with its view into the past, present and future of the MCU.” Here is CGMs review of Loki Episode 1 & 2.

Final Thoughts: Loki managed to steal my focus after two episodes. It took the buddy cop vibe from Falcon and the Winter Soldier and the strong emotional attachment to the protagonist they featured in WandaVision, only Loki did it better.

THE CONJURING: THE LOVER #1

“By creating a prelude and a spin-off, fans of the series can enjoy extra tidbits of fun that grow out of beloved scary movies. It continues to show why this Universe is often compared to Marvel and Star Wars expanded universes and is an exciting proposition to get something similar from a horror franchise. Having only seen the first issue, I know I’ll be tapping my claws waiting patiently for more.” Here is CGMs review of The Conjuring: The Lover #1.

Final Thoughts: DC has launched their horror imprint with a teeth-chattering fright that’s a gift for The Conjuring fans and anyone who longs for horror pulp.

AND A SIX-WAY TIE FOR 9TH PLACE!

“Its tactile D-Pad is responsive and satisfying, though its clicking can be a little loud. Otherwise, the face buttons are pleasantly light, and the clickable thumbsticks respond well when playing the likes of Clap Hanz Golf, where accuracy is crucial. Most impressive, in my opinion, are the “Hall Effect” triggers. L2/R2 can be pressed with the same crisp precision as the face buttons, suited to the arcade-like nature of many mobile games.” Here is CGMs review of the SteelSeries Nimbus+.

Final Thoughts: If you have a use for a controller for your iPhone or other Apple devices, the SteelSeries Nimbus+ is the best bang for your buck.

“Artistically, Scarlet Nexus’s art director, Kouta Ochiai, has achieved something truly fascinating, creating a visual look for the game that blends traditional cel-shaded characters with hyper-realistic images, resulting in a stunning amalgam that truly leaps off the screen, with its thematic focus on red neon strands, tubes and the like giving it that extra punch.” Here is CGMs review of Scarlet Nexus (PS4).

Final Thoughts: Scarlet Nexus is the fresh, new Action JRPG that gamers weary of the “Tales of” series formula have been needing to see from Bandai Namco for a while now, and it shines especially bright on next gen consoles.

Final Thoughts: The Huawei FreeBuds 4i are the latest mid-range Bluetooth earbuds to come out of Huawei. While they aren’t nearly as fancy as their FreeBuds Pro or the AirPods Pro, they may still provide high quality audio for a fraction of the cost.

THE MITCHELLS VS. THE MACHINES

Final Thoughts: The Mitchells vs. the Machines is a heartfelt adventure that provides equal parts comedy and action.

“The diversity of each character’s playstyle is a testament to how well-designed each character is. No one feels out of place, and character specific matchups require different approaches for how your character of choice plays. ” Here is CGMs review of Guilty Gear Strive (PS4).

Final Thoughts: Thanks to stellar mechanics, a great netcode, and beautiful visual and audio design, Guilty Gear Strive is a fighting game you don’t want to miss.

“But perhaps the most exciting addition to the new offering is a feature borrowed from the Echo Show 10 – a camera that pans and zooms on video calls when you move so you’re always in shot. For families this is invaluable, you can have a more natural virtual visit with loved ones, even if you are chasing down kids while talking to the grandparents.” Here is CGMs review of the Amazon Echo Show 8 (2021).

Final Thoughts: With the latest update to the Echo Show 8, Amazon has made an already fantastic smart home display even better.

And our Monthly Dishonourable Mention:
We have a three-way tie!

“The amount of exposition in Infinite is laughable. What could have been a John Wick-esque mysterious world is granted over-explanation bomb drops into the stratosphere, including a literal voiceover at the start that explains what “Infinites” are delivered with the gusto of a disinterested party.” Here is CGMs review of Infinite (2021).

Final Thoughts: Infinite is a lot like some of the “so bad it’s good” action classics of old, but very few people are actually putting in work to make it interesting.

“The Hitman’s Wife’s Bodyguard seems to forget that, without a compelling plot, the audience will never fully invest themselves in the picture. Of course, you have A-list actors such as Sam Jackson & Ryan Reynolds consistently riff off one another during the entire runtime, but that will become tedious rather quickly if you don’t have something to grip the audience in.” Here is CGMs review of The Hitman’s Wife’s Bodyguard (2021).

“I don’t know who I would recommend the TCL 20S to, ultimately. Certainly not power-users or big gamers, as the performance was underwhelming. I might have said it makes a nice bare-bones family phone for parents who do not need a lot of frills—but knowing how often I rely on my own smartphone to quickly capture a golden moment in my kids’ lives, I can’t nominate the 20S to suit that need either.” Here is CGMs review of the TCL 20S Smartphone.

Final Thoughts: The TCL 20S has potential as an alternative to other Android devices, but ultimately fails to meet it.