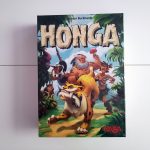 One of our favorite board game brands for kids is the German-based company HABA, and we’ve been lucky enough over the past few years to be able to review a number of their titles. It’s been a while since we’ve gotten a new HABA title in our house, but recently we got the chance to receive a review copy of HONGA.

HONGA is a resource-gathering and points-earning game where players act as different chiefs caring for their tribes. However, as a chief, you must be careful of HONGA, a saber-tooth tiger, who will gobble up your resources if you aren’t careful. The game is aimed at 2-5 players ages 8+ and takes around 45 minutes to play. It has an MSRP of $49.99.

One of the reasons HABA is a favorite board game brand for me is the quality of the components they make. HABA tends to use wood pieces where other companies would use plastic, and the pieces tend to be super durable and feel more like heirloom games. No wonder I remember my grandmother from Germany sent me a few HABA games as a kid, as this sort of reputation for quality tends to create long-lived companies. Size, shape, and bright colors help to differentiate the different markers types, and I really love how the Food Markers look like mini versions of the food they represent or that the Mammoths are actually Mammoth shaped.

The Boards are nice and thick and either snap together or fold up to nicely fit with a reasonably sized box that should fit on most shelves with ease. The artwork is colorful and fun, and the Boards do a nice job of using outlines to help you place components. I especially like the use of dots to indicate what spaces you do and don’t use based on the number of players in your game. The Player Trays are super thick, and I really like that it has little depressions for the markers so that a jostle doesn’t rearrange your pieces and make it impossible to remember what you were set on (a big plus for a game intended for kids).

The Actions Disks, Barter Cards, and Bonus Cards still feel sturdy enough, and I like the use of color to quickly identify which are which. The red Action Disks even feature a mammoth tooth design on them to help remind players which of the cards the player with the Mammoth Tooth will use. There’s some fun art on the Barter and Bonus Cards too, and I really appreciate that the Instruction Booklet has a guide to the symbols of the Bonus Cards.

For a game with a variety of things going on during gameplay, I will say that the Instruction Booklet makes great use of setup diagrams as well as cutting the instructions down enough that the game is still accessible to kids and pretty quick to catch onto.

Overall, I am a big fan of the game components, and if you are familiar with HABA games, you will find their reputation for quality holds up with HONGA.

How to Play HONGA

The goal of HONGA is to earn more points than the other Players. Depending on how many Players your game has, the number of points needed to trigger Game End varies. There’s a variety of ways to earn points including Bartering, Paying Homage to the Old Gods, and via certain Bonus Cards.

HONGA has a decent number of components to organize, but after one game, my kids felt like they were capable of setting it up on their own which is a good sign as far as I’m concerned. To set up HONGA, just follow these steps:

The game is ready to go, and when you use the diagram for the first time setup, things really do go nice and fast and are pretty logical to sort out. After seeing it the first time, our kids (ages 7 and 10) had no issues with setting up a game on their own without needing to look anything up.

One of the nice things about HONGA is that there’s a basic set of gameplay steps but a variety of choices that isn’t too overwhelming. The simplicity should not cause you to overlook the strategy aspect though. When it comes down to it, your goal is scoring points in a variety of ways, and if you aren’t careful, the other players may grab a lead that you have a harder time catching up to. In our game, we found that getting to draw the Red Action Disks tended to create a Resource Advantage that more easily converted to Victory Points later.

On a turn, Players do the following:

When a Player sets down their Action Disk, a Space with a Hand must point to HONGA or HONGA joins you. When joining you, HONGA moves off the Player Board and onto the Player tray and will eat 1 resource. HONGA will eat a Fish First, if one is not available he moves down your Resources until there is something for him to eat. If you have no food but have a Mammoth on your Tray, he’ll eat the Mammoth (discarded Mammoths return to the Depot). The only way to get rid of HONGA is with an appropriate Bonus Card or if another Player sets down an Action Disk without a Hand pointing to HONGA’s space. If HONGA is still with you on your next turn, he eats another Resource or Mammoth.

The following Actions may occur on your turn depending on where the Hands on Your Action Disk are pointing:

The game hits the final round when a Player reaches or surpasses the target number of Victory Points. This number varies by the number of Players and is noted by dots on the board (a 3 Player Game ends at 35 points so there are 3 dots on that space). The current round plays until it reaches the Starting Player. Unplayed Bonus Cards with Victory Points or unscored points from the Sacred Mountain are no longer valid once the round ends. The Player with the most Points is declared the winner (yes, someone can steal the win from whoever activated the final round). In case of a tie, whoever has the most Food remaining wins. The winner is now declared Chief of the Saber-Tooth Tiger Clan.

Why You Should Play HONGA

Like all of HABA’s titles that we’ve experienced, HONGA is a fun, well-designed game with truly excellent components. I am particularly pleased with the little details like indicators on the Game Board for spaces that correspond with how many players you have. The components match up well with the price range of the game, and I just love the careful thought put into them. Normally games in the $50 range are pretty complex, hence the price range, but HONGA’s instruction book broke it done fast enough that we got to playing pretty quickly, and that’s a big plus because kids can and will get impatient with long lists of rules.

Setup is super fast after the first time and the board helpfully outlines where a lot of the pieces go. My kids have busted it out after their initial play and needed zero help from me which is nice. Since the game can run a little longer to play for kids, quick setup is a nice balance.

I have grown increasingly fond of games where the turn has a few simple steps but there’s enough variety in those steps to create some interesting strategies. We did feel that getting control of the Mammoth Tooth earlier really helped gather enough resources to trade for Victory Points later. Our oldest kid, who won the game, also took advantage of the Sacred Mountain scoring and those points probably are what pushed him ahead to first place. Since you never know what pattern you’ll get on the Action Disks there’s just a streak of luck, but choosing to take or not take HONGA also creates an interesting challenge. HONGA steals resources, but if you have the Red Action disks, you might as well rotate the disks in a way that earns you extra stuff. This can wipe out the HONGA penalty and still pull you ahead if you’re clever about it. The game was easy enough to learn that our 7-year-old placed second and was able to play even if the recommended age is 8+, but I feel like it’s still complex enough that they won’t age out of it too fast which is nice given the price tag.

Click through to read all of “Tabletop Review: Gather Resources and Become Chief of the Saber-Tooth Tiger Clan in ‘HONGA’” at GeekMom.If you value content from GeekMom, please support us via Patreon or use this link to shop at Amazon. Thanks!

Click through to read all of "GeekMom: Tabletop Review: Gather Resources and Become Chief of the Saber-Tooth Tiger Clan in ‘HONGA’" at GeekDad.If you value content from GeekDad, please support us via Patreon or use this link to shop at Amazon. Thanks!