Give a High Five for ‘5er Finden’ 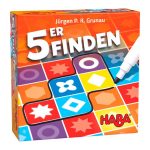 Roll, write, erase, and repeat the fun in this fast paced puzzle game.

What Is 5er Finden?

5er Finden is a real time, pattern searching puzzle game for 1 to 4 players, ages 7 and up, and takes about 20 to 30 minutes to play. The game was designed by Jurgen P. K. Grunau and published by HABA, with illustrations by Oliver Freudenreich. You can purchase a copy of 5er Finden directly from HABA or check with your FLGS.

This small box game is filled with fun components, including:

All the components are top notch. The boards and FIVES tiles are made of thick cardboard with colorful, clear graphics while the wooden dice are likewise well made with rounded corners and colorful, easy to read symbols. I like that the double-sided boards minimize overall components while providing additional gameplay options. And best of all, the components easily fit into a small box. That’s good for the environment and my shelf space.

For the official rules, you can download a copy of the rulebook here. There are two ways to play 5er Finden – standard mode and puzzle version. I will describe the standard mode first.

The goal of the game is to have the most points after five rounds.

Next, write each players name and/or initials on the scoreboard and lay the FIVES tiles in the middle of the table within easy view of all players. Lastly, keep the dice and timer handy.

Turns are taken simultaneously in 5er Finden. To begin the game, one player will roll the dice. As long as the same color/symbol is not represented more than twice, you keep the roll. If any side of the dice is repeated three or more times, reroll the dice.

Once the dice pattern is set, the players all scramble to find FIVES shapes composed of the five sides of the dice shown. There are a few rules to outlining FIVES on your board:

At anytime during the round one of the players may flip over the timer. When this is done, that player can no longer trace any more shapes. The other players have until the timer runs out to find more FIVES. Then it’s markers down and time to score the round.

When scoring, double check that each player followed the rules as outlined above. Additionally, that each shape contains the five colors/symbols shown on the dice. If any of the rules are broken, you do not score for that shape. Also, if a player outlined more than five shapes, you only score the lowest point shapes.

For each correctly outlined FIVES shape on your board, you get the points as shown on the matching FIVES tile. Additionally, the player that flipped the timer gets one additional point. When scoring the fifth round, double each player’s points for that round.

The goal of this mode is to have the most points after twelve rounds.

Like in the standard version, each player takes a game board and marker. However, in this mode, use the puzzle side of the score board. Place the puzzle board in the center of the table and write each players names or initials on one of the four sides. You will use this board to track the FIVES shapes from round to round, so you don’t need the actual tiles, but you will still need the dice and timer available.

In the puzzle version, each round begins by a player rolling the dice, following the same rules forthe standard mode. The twist is that you can only trace a single FIVES per round, and at the end of the round you don’t erase your board. Instead, if you successfully found a FIVES, you circle that shape on your quarter of the puzzle board. However, if you didn’t find a FIVES, then you must cross off one of your remaining shapes on the puzzle board and additionally draw that shape anywhere on your board, filling it in so you know that it doesn’t count towards final scoring. Each round, you have less FIVES shapes available to find as well as a shrinking area to find them in. The timer is used similarly to the standard mode and the first person to flip it each round, scores a point and fills in one of their circles on their portion of the puzzle board.

After twelve rounds, the game ends. Add up the points for each FIVES not crossed off in your quarter of the puzzle board, plus any points from flipping the timer. The player with the highest total is the winner. In the case of a tie, the player with the most circled FIVES is the champ. If there is still a tie, the the victory is shared.

Why You Should Play 5er Finden

Over the past few year, there has been a glut of roll-and-write games released. And although 5er Finden is another addition to that genre, it brings a fresh perspective that I have not seen in other roll-and-write games. First, I love the real-time, competitive nature of 5er Finden. The game moves quickly, and win or lose, it is fun to see how many points you can get. Each round presents a new puzzle, based on the dice roll. And a new opportunity for more points! Do you quickly find as many FIVES as possible, regardless of their point value so that you can be the first to flip the timer, putting pressure on your opponents? Or do you instead take the extra time to find those higher scoring FIVES?

5er Finden is like one of those 3D hidden pictures that you would have to stare at, relaxing your eyes until the picture finally became visible. Each round, you stare at your board, willing the FIVES to pop out. After a few rounds, you didn’t even need to reference the FIVES tiles since as long as you found five squares that were connected with the right colors/symbols, then you know that it will match one of the tiles. Having the tiles on the board are mainly useful to check the point values. The 1-point tiles are definitely easier to find and I would often find multiple of those whereas the 4-point shapes were not always possible with every dice combination. With multiple plays, I developed a strategy, working from the outside of my board in, trying to find the higher scoring tiles. Sometimes outlining a FIVES only to find a higher scoring shape that overlapped. Quickly erase, trace, and keep looking. This fast paced puzzle creates the right amount of fun without being too repetitive or staying too long on the table.

And with the two versions of play, I feel like you get 2-for-1 special with 5er Finden. The puzzle version provides a completely different way to play the game without introducing new components or even significant rule changes. What I enjoyed about the puzzle version is that as the game goes on, your board gets tighter and tighter, making it more difficult to find a valid FIVES. At some point, you will have to make a decision to cross off a shape. Do you mark a 4-point FIVES, knowing that you have a better chance of finding one of the lower point shapes, or take the risk of scratching off a 1-pointer tile in hopes of more points?

Additionally, the puzzle version can be played solo. Just keep the timer in the box and play through all the rounds as you would a competitive game, trying to get your best score. Since the real-time component is removed, I found the solo version to be very relaxing, and a fun, third way to play the game.

While I have thoroughly enjoyed playing 5er Finden, I found that it is not colorblind friendly. Although the components have symbols for color blind gamers, the real-time nature of the game puts them at a disadvantage because it is just quicker and easier to identify FIVES by their color combinations versus the symbols. In fact, while playing, I don’t even identify the symbols. I simply look for the required color pattern. I played several games with a color blind friend of mine who still enjoyed the game by focusing on bettering his own score from game to game, but was never able to compete with the other players at the table.

Overall, 5er Finden was hit with both my gaming group and my family. The colorful nature, dice rolling, and being able to draw on the game itself were all very enticing to my children. Although I did have to slow down my pace when playing with my younger daughter, my ten year old was able to compete well with adults. And now that they know how to play, they will often take the game off the shelf to play with each other, or even just casually roll the dice and see how many shapes they can find. I love it when a game provides entertainment for my kids that doesn’t require my oversight, and 5er Finden does just that!  For a lightweight, family game full of fun, 5er Finden gets five stars from this dad.

Click here to see all our tabletop game reviews.

To subscribe to GeekDad’s tabletop gaming coverage, please copy this link and add it to your RSS reader.

Disclosure: GeekDad received a copy of this game for review purposes.

Click through to read all of "Give a High Five for ‘5er Finden’" at GeekDad.If you value content from GeekDad, please support us via Patreon or use this link to shop at Amazon. Thanks!