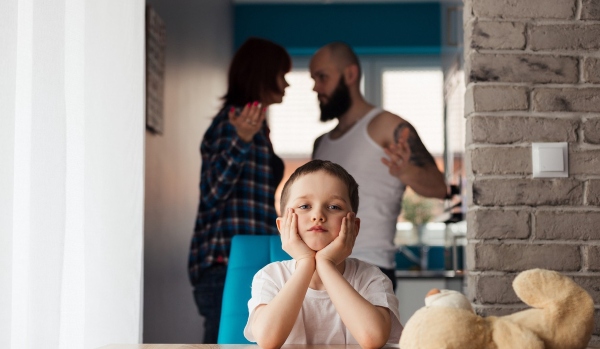 Adam never slept much on the nights his parents stayed out late. He knew from how his father put the key in the door — with ease or fumbled attempts — whether it’d be a calm night or a violent storm.

Although he was only 9, Adam learned to read people from watching his mother and father interact. He could spot “tells” — like the slight nostril flare, the micro-expressions of facial muscles, or the way someone tossed ice cubes in their glass — when things were about to explode.

Whenever the dark clouds of a violent storm came hailing down, Adam didn’t freak out or hide like his siblings. Despite the domestic bombs going off all around him, Adam stayed calm in the face of danger.

Adam’s ability to remain calm in crisis wasn’t a show of courage. It was a survival strategy to deal with everyone else around him falling apart and giving up.

The way Adam figured it, somebody on the sinking ship had to keep their head together and develop an emergency evacuation plan. So considering there were no other bidders for the job, Adam always volunteered to steer his family to safe harbor, even though he was the youngest person on deck.

This ability to read people made Adam an attractive counselor for adults to confide in and unload their sorrows. And his stoic demeanor made people think Adam was a natural-born leader.

But Adam didn’t want to be a leader. He just wanted to be a kid. But instead of playing games, he had to play the part of the reluctant counselor and family advisor.

Adam was not alone in serving as the unlikely family leader. He’s like thousands of other kids that survive difficult home situations by becoming survival guides.

While many kids make it out of these troubled waters to become promising adults, they end up missing critical parts of their normal development cycle. And they have to deal with the consequences of people constantly looking for them to solve problems and manage crises, regardless of their lack of formal training for this job.

As Adam grew up, he realized that kids who survive troubled homes have five hidden traits that others can sense under the radar of their consciousness.

During one violent, stormy night, the cops came to Adam’s house with a team of social workers tagging along, conducting field research. Adam tried to contain his dad’s drunken rage before getting arrested while also counseling his mother’s threats to commit suicide.

One psychologist watched on as this young kid disarmed the bombs of domestic abuse and soothed the family feathers. The psychologist was the first person ever to ask Adam this poignant question:
“Are you ok with adults dumping their problems on you like this, son?”

“Not really,” Adam said, frustrated to be up this late on a school night.

“I’m not sure why people think I have any answers for them,” Adam replied. “I’ve never been married, tasted alcohol, paid taxes, or driven a car? What help could I possibly offer anyone about how to manage their lives?”

The psychologist studied Adam for a few contemplative seconds and said,

“You just have one of those faces of refuge that says, ‘Bring me your problems, and I’ll give you hope.”

“Having a safe harbor face like that is both a blessing and curse,” the psych continued, “but you’ll have to figure out what to do with this capacity as you grow up. Don’t let it get the best of you!”

And with those words of wisdom, the psychologist walked out of the flickering siren lights, never to appear again.

But Adam never forgot his advice. He realized that being a counselor was not something he chose but more of a presence he gave off.

As humans, whenever we interact with people, we involuntarily scan their eyes and try to look into their souls. What are we looking for in these eyes? Clues to whether these people are our “friend or foe.”

All of this scanning and searching happens within a few subconscious milliseconds, often with no words ever spoken. But this primal ability to scan faces and search eyes allowed our great ancestors to determine whether a neighboring tribe was a threat or a potential ally.

None of us get to choose our eyes or faces. They just come with the package. But some people have “survivor” written all over their faces like a hidden barcode. And some people have the eyes of an old soul, even if they’re still in their teens.

The survivors that look like they’ve been through the ring of fire and made it back alive have a natural appeal to others. That’s why we love to hear stories of how people survived a plane crash in the Alps, made it a week out on a raft in the ocean, got trapped in a coal mine, or a kidnapper’s dungeon.

Seeing how others “made it out alive” is our instinctual way of learning how to survive future calamities and everyday difficulties. While most survivors haven’t lived on a raft in the middle of the ocean for a week, many have made it through the garden variety crisis stuff: broken homes, addictions, assaults, divorce, health problems, and other unfortunate situations.

And that experience — lived in this lifetime or not — has value to others.

Adam learned to derive meaning and purpose from helping others out. Perhaps that’s why he became a lawyer.

However, despite his harsh upbringing, he wasn’t the type of lawyer that loved to fight. Instead, Adam was good at bringing closure to complex cases and mending irreconcilable differences. He used the same bomb dismantling techniques as an adult as he did when he was a kid.

Rescuing people from dangerous situations motivated Adam. But he had to watch how far he went into these dark caves. If not, he’d miss out on the rest of his life, as he did his entire childhood.

Some people walk into a room, and others have an immediate reaction. They might feel threatened, jealous, competitive, intimidated, or defensive right off the bat. That wasn’t Adam. He could slip into a room, and most people didn’t notice he was even there — until he spoke with his calm, commanding voice.

Despite his tall height and strong, lean swimmer’s body, Adam was very unassuming and non-threatening in his presence. Some 6’3″ people look like their 9 feet tall. But at 6’3″, Adam didn’t lord his body size over others. He made himself seem small, gentle, and unimposing.

People felt safe to confide their problems in Adam and comfortable telling him their secrets without fear he’d use the information against them.

And this non-threatening stance allowed Adam to tell people — his friends and clients — what he candidly thought about their position or predicament without them feeling vulnerable or getting defensive.

When we’re kids, we learn how to get the love we need — first from our parents, then from others. This love provides the nourishment we seek. And, like Pavlov’s dog, we quickly figure out what we need to do to get more of these nutrients every day.

Some of us get this love and affection by bringing home a straight-A report card, becoming the most valuable player on the sport’s team, the best-looking person in the school, or even the local troublemaker.

And some of us get this love, attention, and heavy petting by being a skilled listener, a good problem-solver, a wise advisor, a tireless supporter, and a permanent “fixer.” That was Adam.

Instead of allowing himself to feel good enough “as is,” Adam measured his self-worth and value in life on what others thought of his help. This quality is admirable, but others used it to manipulate Adam. And he had to watch that part of himself closely.

The missing purpose survivors need to work on

For all of Adam’s expertise in surviving the challenges of life and rescuing others, the one thing he sucked at in life was “thriving.” Adam didn’t know how to relax, enjoy life, celebrate his victories, or see a successful person in the mirror.

This problem is a common issue that many kids from broken homes have. And it’s also a quality that many reluctant counselors and advisors have in life. They’re highly effective at helping others survive in wartime. But they don’t know how to thrive themselves in peaceful times.

Most survivors have spent their lifetime training themselves to stay calm and reserved and not get too excited about anything. They learn how to hunker down, weather the storms and always be on the lookout for the next crisis around the corner. And without meaning it, they often see the world as a volatile and dangerous place, full of impending trouble and about to erupt into chaos at any moment.

But if you spend your entire life “hoping for the best but planning for the worst,” you’ll never know how to take your firefighter’s suit off to relax and enjoy the backyard BBQ parties and fireworks of life.

Adam couldn’t go back in time and erase all those moments he had to be the adult in the room — instead of a kid. Nor could he undo his survivor instincts.

But by recognizing the five traits above, Adam could catch himself before falling into the automatic role of Head Fixer of other people’s lives. And he could see the patterns and habits of his rescuer instincts.

Most times, Adam didn’t mind serving in this role, particularly when it helped someone in need. But instead of just assuming the position, Adam now consciously chooses whether to be the rescuer/counselor or focuus on his more urgent project in life:

Learning how to thrive!

Join The Good Men Project as a Premium Member today.

All Premium Members get to view The Good Men Project with NO ADS.

Log in if you wish to renew an existing subscription.

By completing this registration form, you are also agreeing to our Terms of Service which can be found here.


Need more info? A complete list of benefits is here.

The post How Growing up a Survivor Can Make You Miss the Most Important Purpose of Life appeared first on The Good Men Project.