How will a return to college football after a pandemic compare to that of returning from a Latter-day Saint mission? 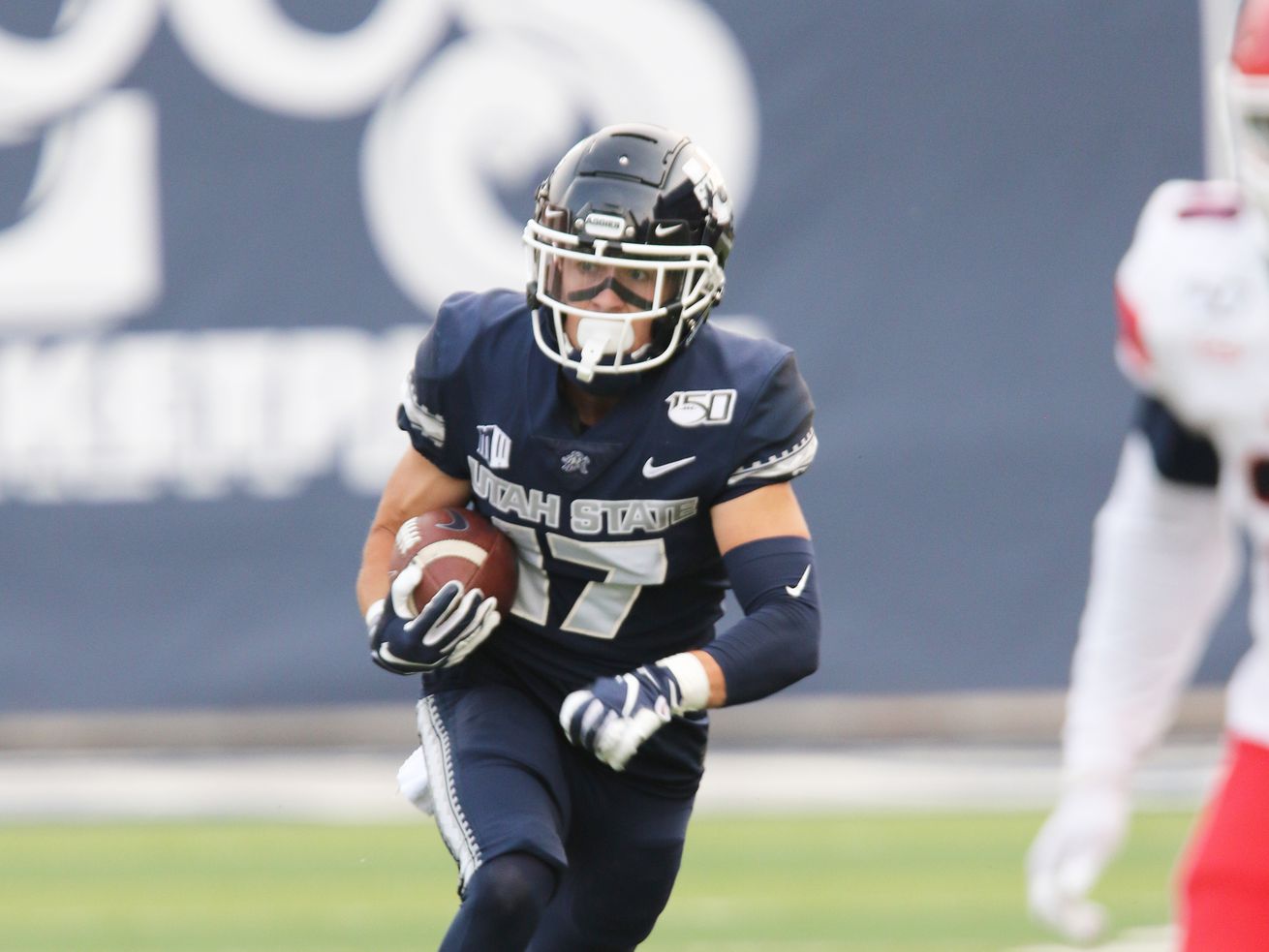 Utah State wide receiver Taylor Compton shared his thoughts on whether coming back from a Latter-day Saint mission and returning from the pandemic would have any similarities for athletes. | Wade Denniston, USU Athletics

LOGAN — It was a practically a throwaway line in an almost 20-minute interview conducted between Utah State coach Gary Andersen and sports radio host Scott Garrard for Utah State Athletics.

When talking about how much time is necessary for student-athletes to be back on campus in focused, team-driven training programs, under the direction of strength and conditioning coaches, Andersen noted, “Injuries become a big concern. It is much like when a young man comes back from off his mission. These kids have had some opportunity. Some have been in the weight room the whole time, they had a squat rack and weights, while others have had bands and then others have had nothing. ... We are going to need some time. Everyone is going to need some time.”

“I have access to weights and a football field that I can work on. I’ve been able to work on my technique, craft, conditioning and speed, and I have all the time in the world to do that. On the mission you have a half-hour.” — Utah State wide receiver Taylor Compton

Andersen’s statement concerns the safety and well-being of student-athletes. Football is a physical contact sport, requiring a unique combination of speed and strength, and for the sake of the athletes, careful training and preparation time are needed.

And yet, the phrase “it is much like when a young man comes back from off his mission,” engendered a question: Will a return from the COVID-19 pandemic be comparable to a return from a Latter-day Saint mission?

Who better to ask than a returned missionary. The Aggies have more than a few of them, one being senior wide receiver Taylor Compton. After starring at nearby Logan High, where he was a part of the 2011 state championship winning team, as well as a first-team All-State selection in 2013, Compton left for Buenos Aires, Argentina, where he served his two-year mission for The Church of Jesus Christ of Latter-day Saints.

Upon returning, Compton walked on at Utah State and redshirted a year, before appearing in two games during the 2017 season and then becoming a rotation player in 2018 and 2019. Compton has been through it all — a mission, the return and now the COVID-19 pandemic.

While conceding that available facilities are a wild card in the equation — as Andersen noted, some student-athletes have had access to home gyms and empty football fields, while others have had to utilize body weight exercises and any available patch of grass — Compton was clear when it came to his thoughts on the comparison.

“I don’t think it will be anything like that,” he said.

His reasoning is simple. Missionaries are allotted just 30 minutes a day to exercise, while athletes during the pandemic have “all the time in the world,” to get their training in.

“I have access to weights and a football field that I can work on,” said Compton. “I’ve been able to work on my technique, craft, conditioning and speed, and I have all the time in the world to do that. On the mission you have a half-hour.”

Because of that, he’s been able to stay in relatively good shape, a near impossibility during his tenure as a missionary.

It took the 5-foot-8 slot receiver nearly a calendar year after he returned from Argentina to feel like himself on a football field, though he jokes that that might have had something to do with what he perceives as less than Adonis-like physical qualities.

“Everyone is different. There are guys who are more naturally gifted than I am. I’m not exactly a specimen,” he said with laugh, “but that was a rough transition. I didn’t feel like I was back to my self until probably a year after. After my redshirt year is when I started to feel like myself again, going into that summer. It took me a while.”

And after two-plus months of COVID-19 restriction, he feels ready, from a physical standpoint, to play a football game.

“Personally, I’ll put on the pads tomorrow if I can,” he said.

“With football, your life is very structured and tells you where you need to be. It (the pandemic) has helped me learn how to be more self-motivated. You learn to do things on your own and have self-initiative.” — Utah State wide receiver Taylor Compton

None of that means that dealing with the pandemic has been easy, though. The abrupt end to spring football and normal life, as well as the shift to online school has tested everyone. For collegiate athletes who are used to an extremely structured and well-supervised life, the greatest challenge has been becoming more self-motivated, having the initiative to set an effective schedule on their own.

“Everything is usually so busy, so rigid, and the biggest adjustment has been setting your own schedule,” said Compton. “I’m used to it — I served a mission — but as a collegiate athlete you are used to that structure and schedule and all of a sudden you have to make it on your own, balancing football, academics, your social life and service.

“With football, your life is very structured and tells you where you need to be. It (the pandemic) has helped me learn how to be more self-motivated. You learn to do things on your own and have self-initiative.”

Because of that, Compton believes there is no excuse for athletes to come back from a life of social distancing out of shape and unprepared.

“Obviously, depending on your situation, some people might come back and not be where they want to be,” he said. “Because of circumstances they haven’t been in a Division I weight room, or had access to all those amenities and things that you are given. But for the most part, if you are doing what you should, guys should come back fine.”

Meaning, there probably shouldn’t be such a thing as “coronavirus legs.”