By Abraham A. Schechter 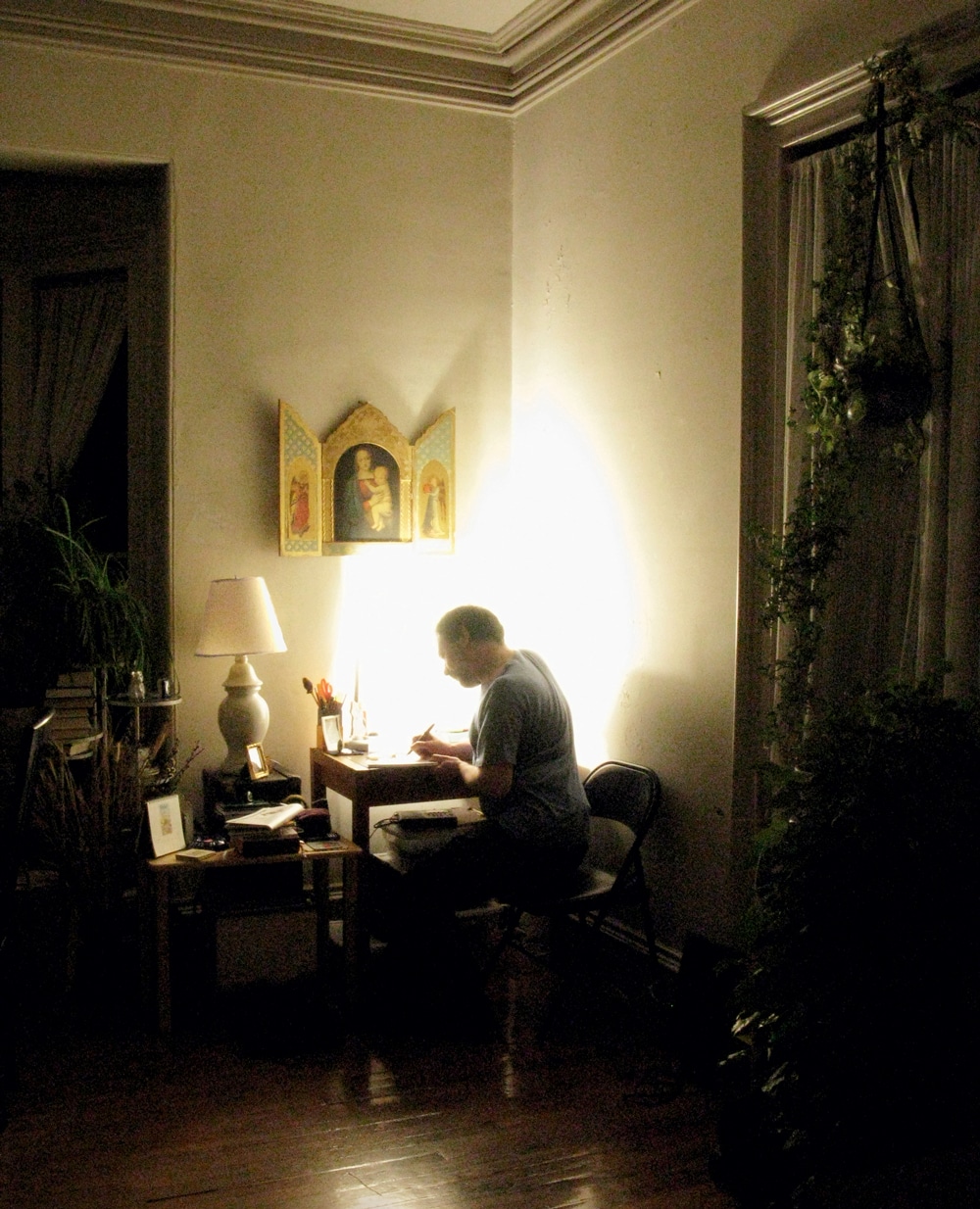 The author at home. In addition to his full-time job as an archivist, he writes essays and studies and teaches philosophy, “believing that each person’s observations are eminently worth recording.”

In late 2009, I seized upon an unusual opportunity that few archivists ever encounter. Maddy Corson, the granddaughter of the Portland Press Herald’s founder, alerted me that the newspaper had again been sold and that the building constructed by her grandfather in 1923 was being gutted. For me, as the Portland Public Library’s archivist, preservation and access to history are of primary importance.

Hurrying downtown by bicycle, I saw large piles, stacked boxes, and bags of unorganized photographic negatives in the Gannett Building’s basement. Being a lifelong photographer, I recognized the mounds of cellulose fragments as camera originals, surely holding a century of regional history.

Snapshots from the Portland Room archives at the Portland Public Library only hint at the scope of Schechter’s work—not just acquiring raw material, like the trove of photographic images he’s rescued from the former Portland Press Herald building, but also arranging, describing, preserving, digitizing, and otherwise paving the way to make history available to future generations.

Finding the demolition supervisor, I asked him about the film. He was surprised that I wanted the discarded negatives, even after I told him what they meant. “You want this stuff? Then you gotta take it away this week, or it’s all going to a smelter,” he said, referring to the film’s silver content.

With Maddy’s support, along with the library’s, the film was moved out of the damp basement to a workspace for me to begin the herculean task of salvaging and rescuing what has turned out to be a priceless trove of more than half a million unique photo images, taken between 1936 and 2004.

It took three years to analyze, organize, and arrange all the film; during that first pass, I examined more than a million exposures. Afterward, I began rehousing the images, now protected in alkaline enclosures, at the library. The processes are painstaking, requiring precise locations, names of buildings and people, and dates so that these images—which had been right on the precipice of a smelter!—can be rediscovered by the public.

From the start, I understood there would be years of work ahead, but the urgency of preserving the images was my greater concern. And even while looking at those sorry mountains of scattered negatives, I could visualize the completed work. The archive is still in progress. 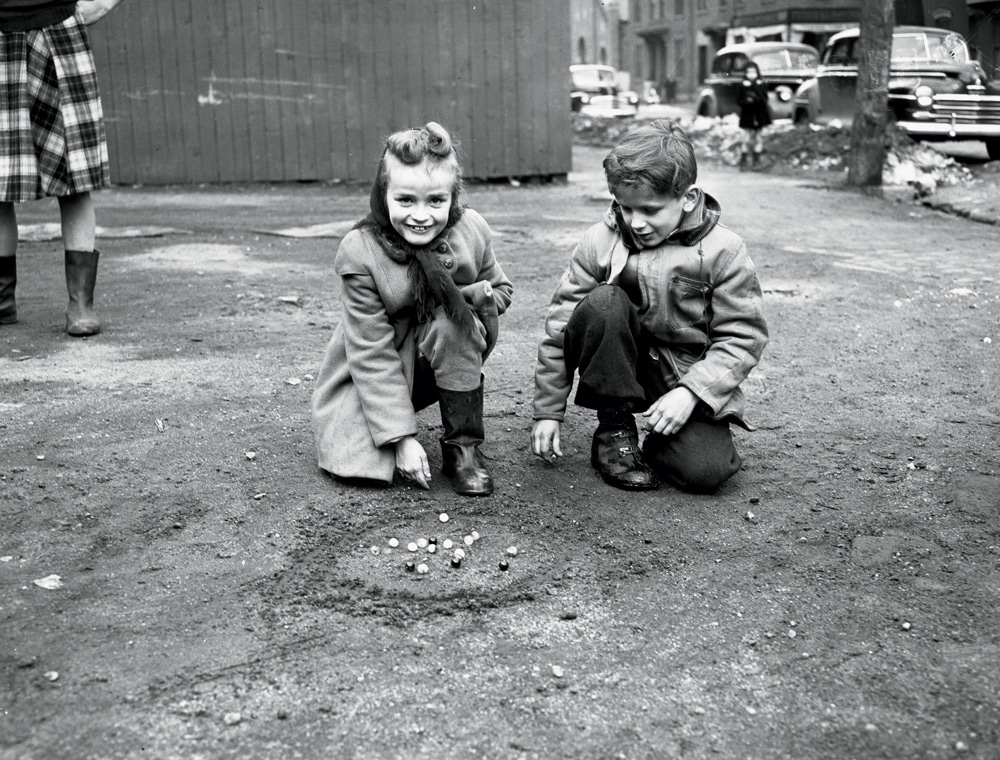 MARCH 1948 (above): For generations of inner-city kids, there’s often been no play space more convenient than an open bit of sidewalk. Here, Joyce Hansen and her brother Tracy play marbles along Portland’s Federal Street.

The unexpected joy in this stewardship is how the project took on a community aspect. My volunteer assistants have been senior citizens with a flair for history and memory. They remember many of the subjects in the photos, and our work together has been as satisfying as it has been productive. We’ve used a space in the library’s Portland Room, and passers-by have watched the project take shape. They ask questions, and the years of banter have forged a fellowship of appreciation for valuing local history. Everyone has stories, and I listen.

When the pandemic forced quarantining, my work on thousands of image scans I’d made from the negatives moved to my dining table. There, I began building digital archives. Digitization and accuracy is demanding; each image has information to be respected. 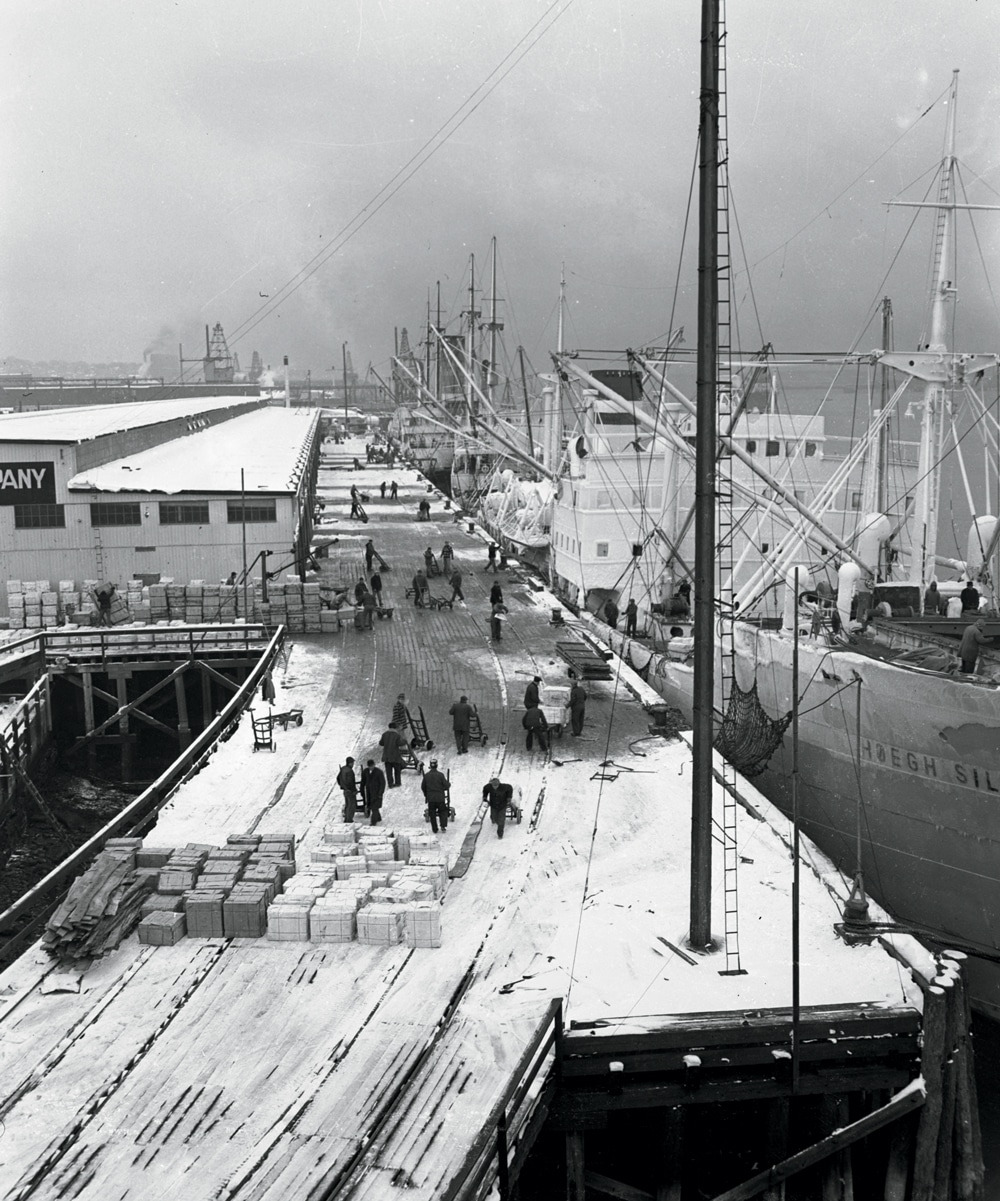 JANUARY 1950: A snowy but bustling Portland Terminal Company pier reflects how the rebound of commercial shipping in the postwar years generated employment here for some 350 longshoremen.

Over the past year, I’ve heard from many people who live far from Maine. The comments are profoundly touching. They give me encouragement that I’ve been doing the right things in the right ways, ever since the day I saw those acetate heaps about to be lost forever. These images, these frozen moments in the lives of places and people, are indeed meaningful. 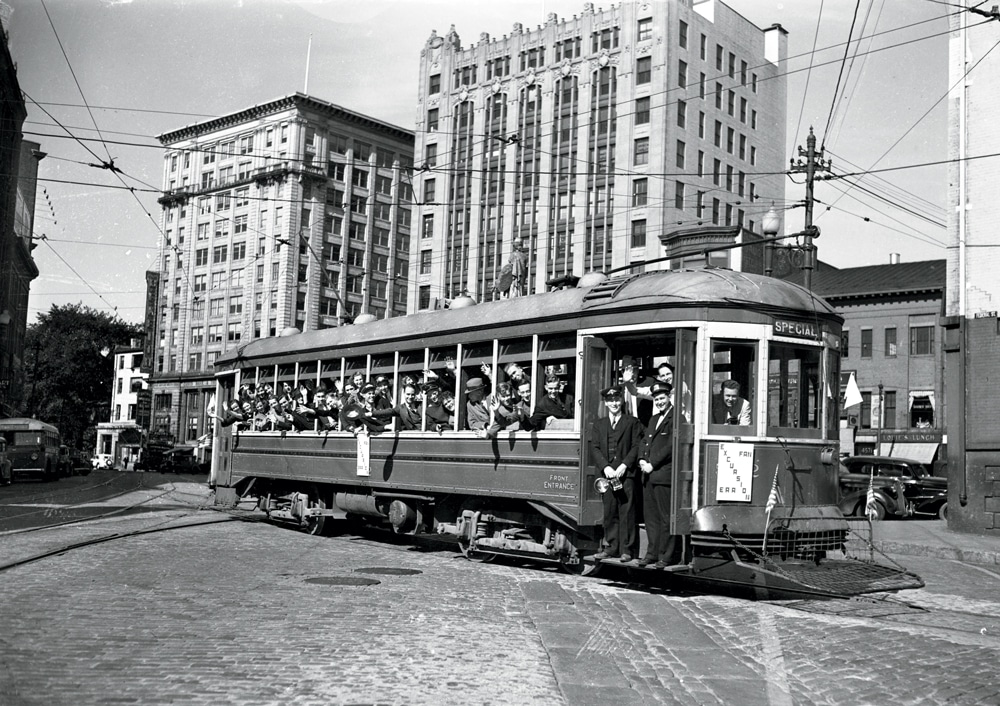 SEPTEMBER 1938: The history of trolleys in Portland dates back to the early 1860s, when horse-drawn cars clopped down the streets; they were succeeded by electric versions starting in 1895. In this photo taken on Monument Square, Maine Electric Railroaders Association members set forth on an all-day tour of the city’s rail lines. (Trolley car service in Portland would end just a few years later, in 1941.) 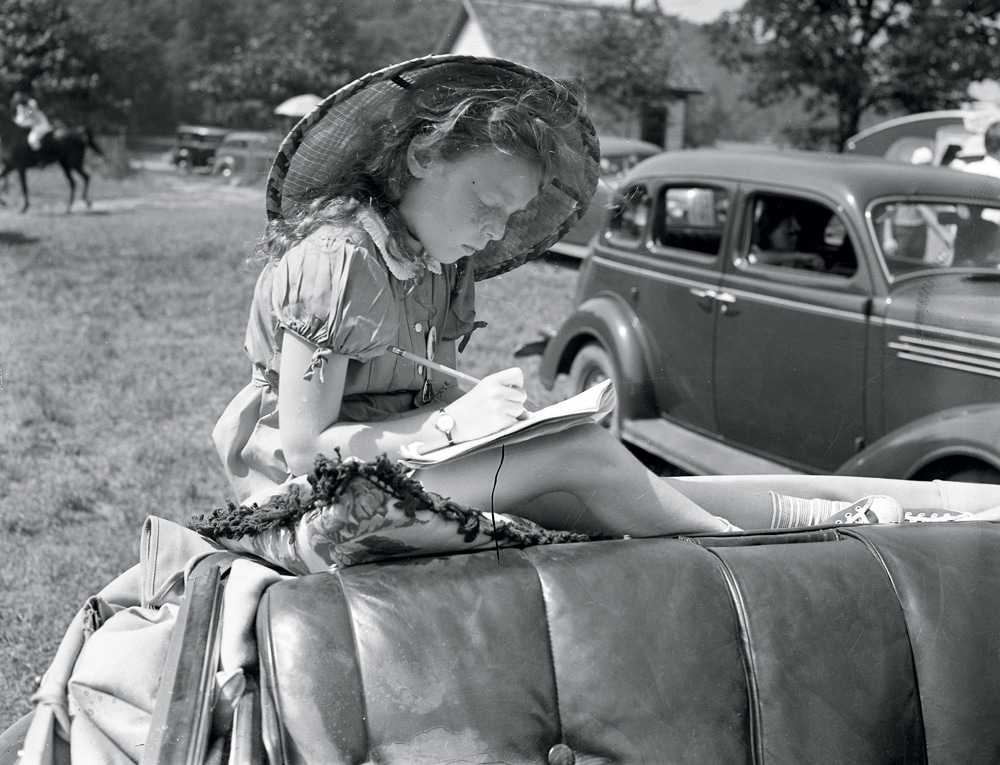 AUGUST 1938: The newspaper images that Schechter rescued paint a picture not just of Portland but also of life in Maine’s rural communities—such as Harrison, which was hosting its Old Home Week when this photo was taken of a young visitor from New Hampshire, Marcia Corliss, writing in her diary during the Three-Gaited Championship horse competition. 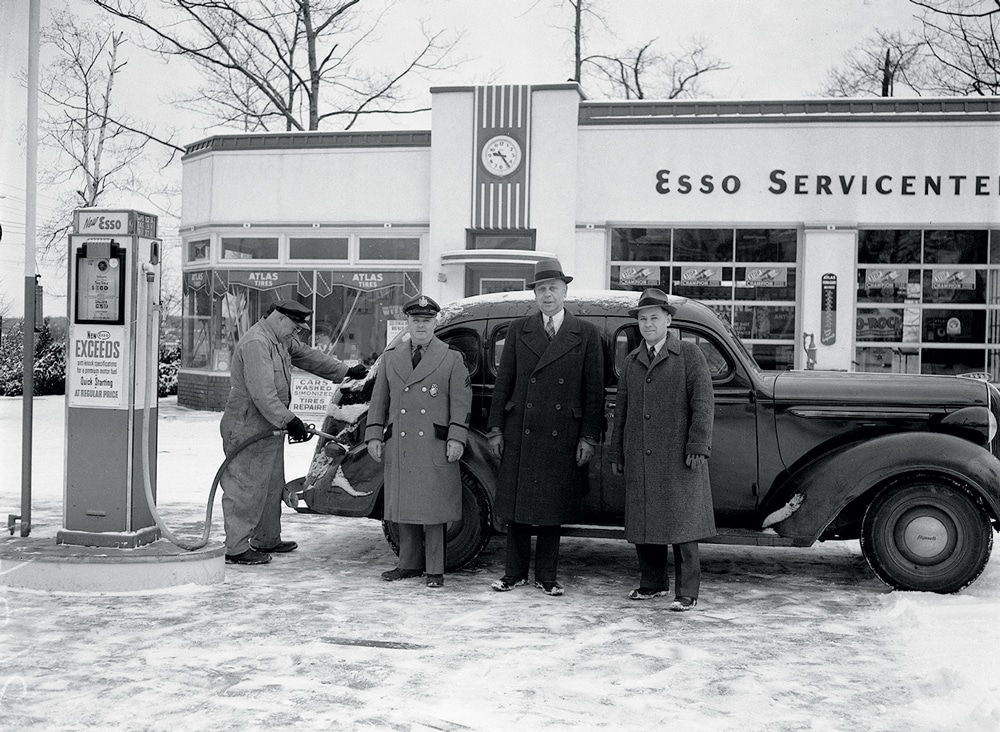 DECEMBER 1939: In the early decades of the automobile age, Portland’s first sale of the “New Esso Gas” was a newsworthy event. In this image, a full tank of the improved motor fuel formula, dubbed Esso Extra, is being sold to State Motor Vehicle Inspector James A. Adams (second from left) at the Esso Service Station on Forest Avenue at Dartmouth Street. 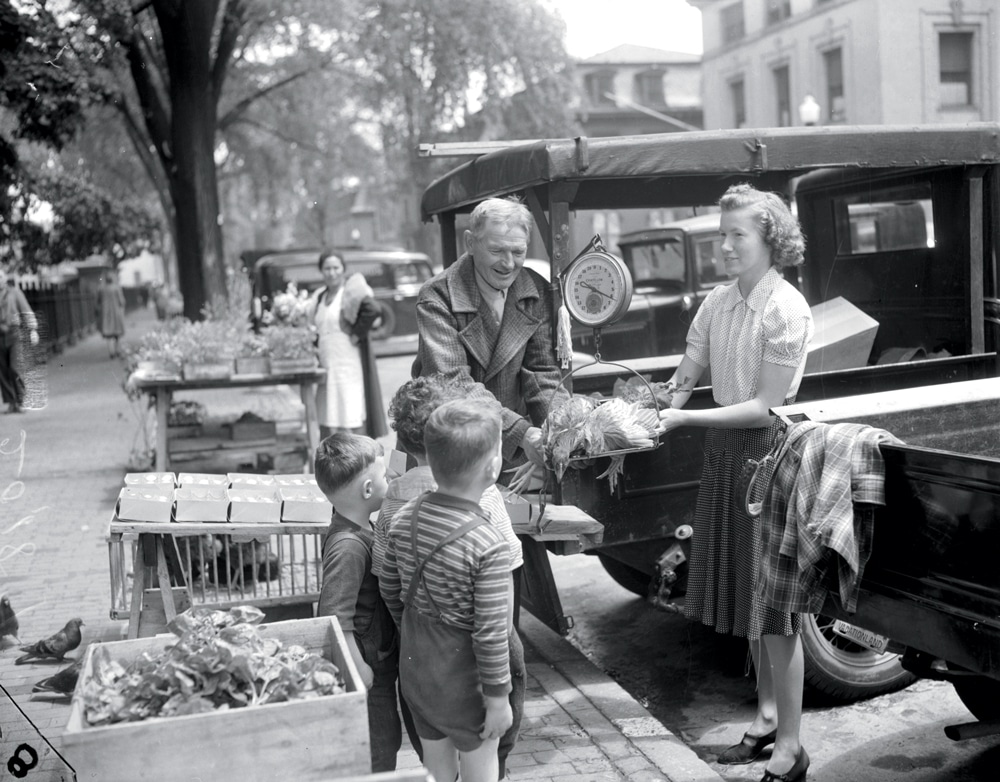 JUNE 1940: With roots going back to 1768, the Portland outdoor farmers’ market has long brought the bounty of the countryside to urban dwellers. Now based in Deering Oaks Park, the outdoor market was located for many years on the Federal Street side of Lincoln Park, the site of this photo of a group of kids fascinated by the flapping and cackling chickens on the farmer’s scale.

I’ve also been learning about the sustaining power of nostalgia. People tell me about the stores, restaurants, parks, and schools they remember. And I see how a still image can ignite emotional and detailed memories from people far and wide. I digitized and posted a photo of a popular doughnut shop, and another of a delicatessen—and streams of comments followed, regaling me about what everyone loved to order, summer jobs, school days, and family traditions. When I post photos of stores, people tell me about what they bought at these places. One man told me that he had no pictures of his father’s furniture store from decades ago. I found one and posted it, to his great joy. 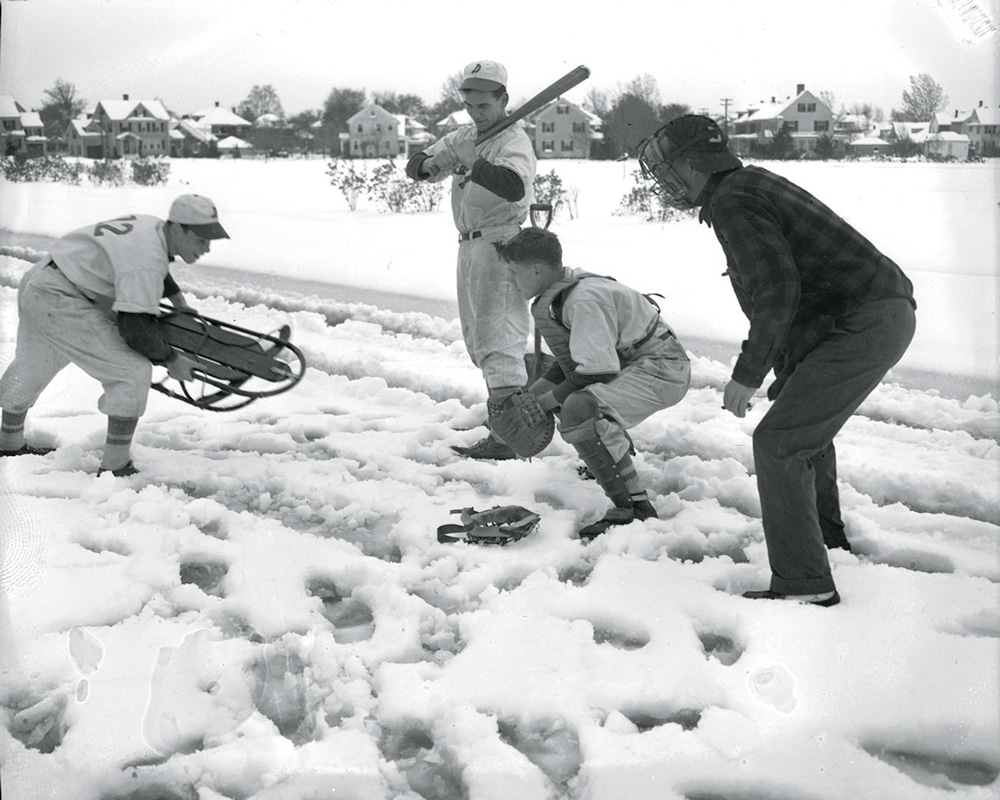 MAY 1945: Proof that Mainers are used to handling the curveballs that New England weather can throw at them: With their May 11 game against South Portland High School canceled by a freak snowstorm, Deering High baseball players have a little fun on the field as Gene Sturgeon prepares to slide into home plate with a sled. 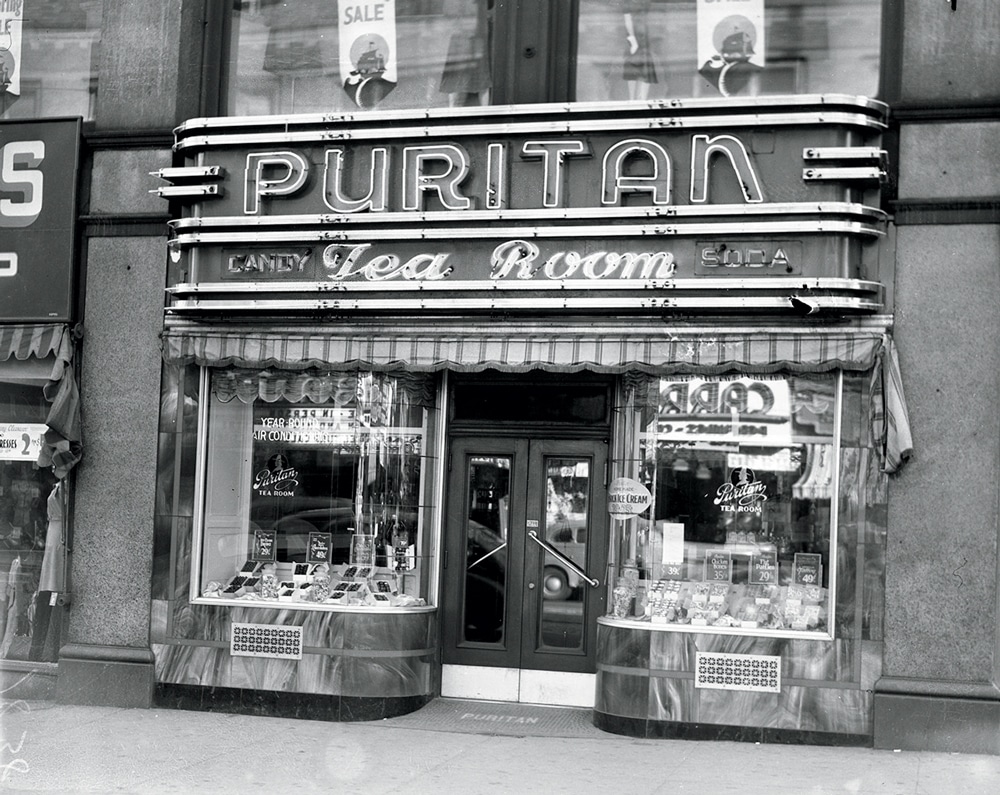 JANUARY 1940: Opened on Congress Street in 1921, the Puritan Tea Room reigned as a fixture of downtown Portland for more than half a century. The modernization shown in this 1940 photo was accompanied by a caption proclaiming that the Puritan was the first establishment in New England to have year-round gas-powered air conditioning, assuring “the correct temperature and humidity for all seasons.” 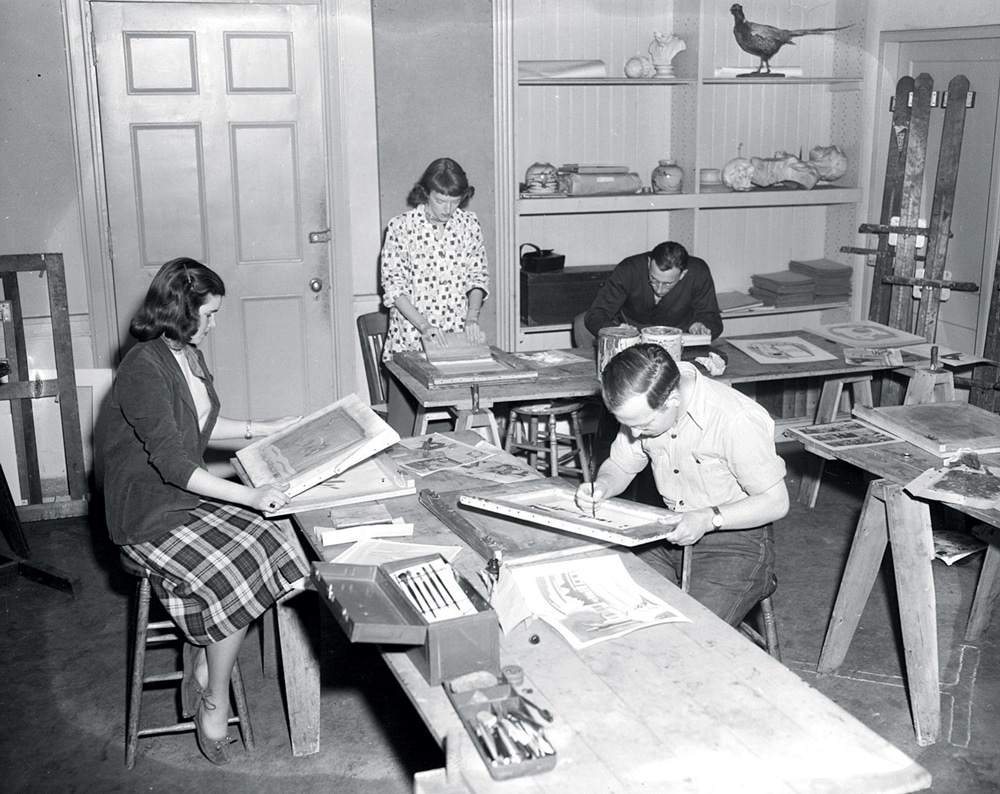 MARCH 1950: Printmaking students work on their silkscreen designs at the Portland School of Fine and Applied Art, then based at the Charles Q. Clapp House on Spring Street. Founded in 1882, the school is the oldest arts educational institution in Maine; today it’s known as the Maine College of Art & Design and makes its home in a sprawling Beaux Arts–style building that once housed a department store. 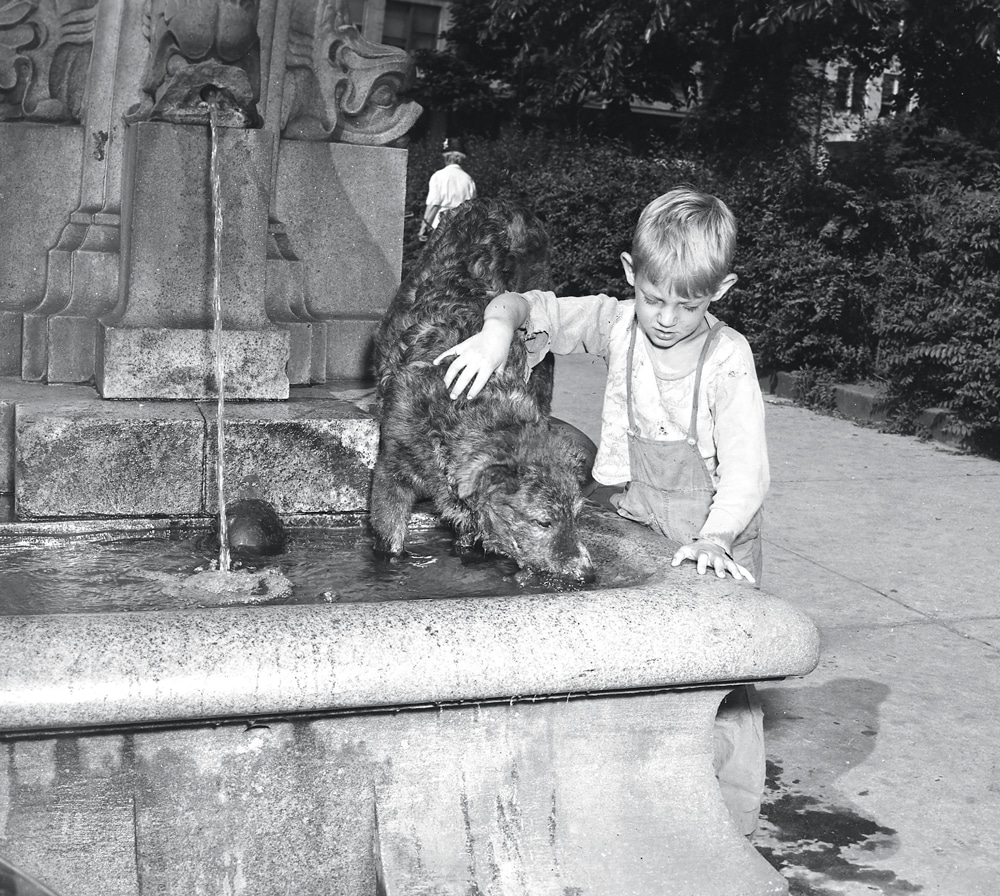 JULY 1948: Named for one of the founders of the Maine Society for the Protection of Animals, the Stanley T. Pullen Fountain on Federal Street has served as an urban oasis ever since its construction in 1910. Used as a horse watering trough both then and now, the fountain was called “The Bubble” by children like Freddy Collins, whose dog Tippy looks grateful for a drink of water on a hot summer day.

I do not consider nostalgic viewers of archives as different from me. While I’ve been assembling archives out of the film, I’ve been reconstructing a world that is still remembered by many. And I’m part of this, too. These photos restore the histories of people who previously had only their memories to provide images. Anecdotes faded and blurred by time are suddenly sharpened. 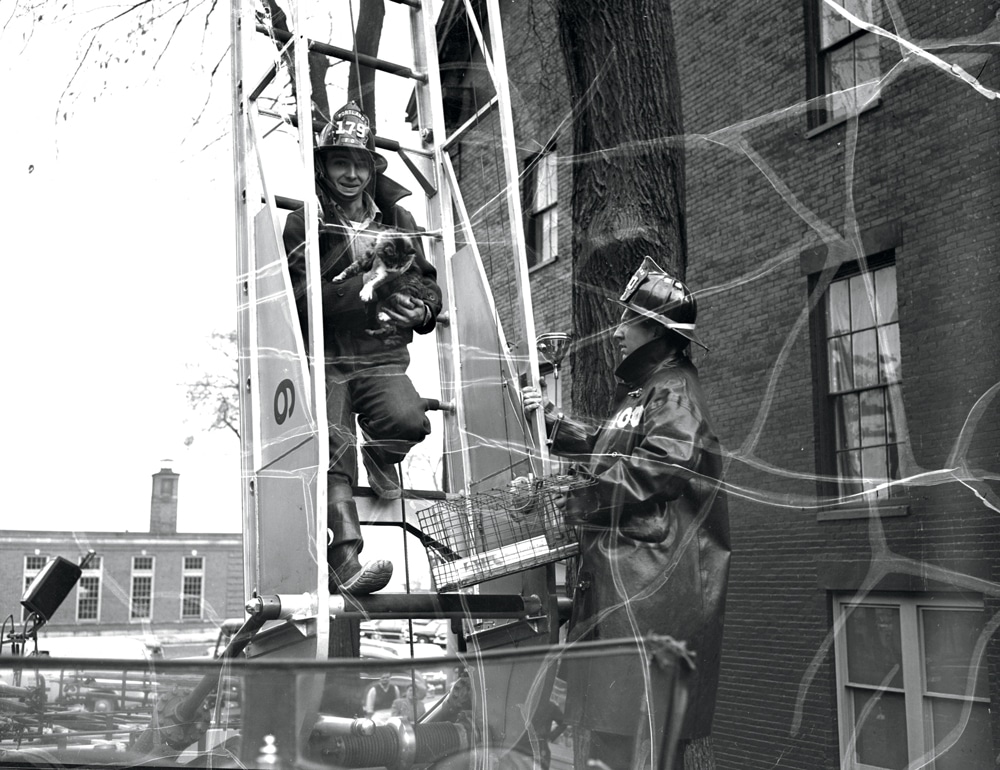 OCTOBER 1955 (above): The Portland Fire Department has been coming to the rescue of city residents since 1768—including the four-legged kind, as proved by this photo taken on Mechanic Street of firefighter Joseph Miller carrying a cat to safety.

Photography can uniquely say, “Yes, this happened,” and, “It was really there, and so were you.” Archival photographs are evidence, stopping time in the click of a lens shutter. 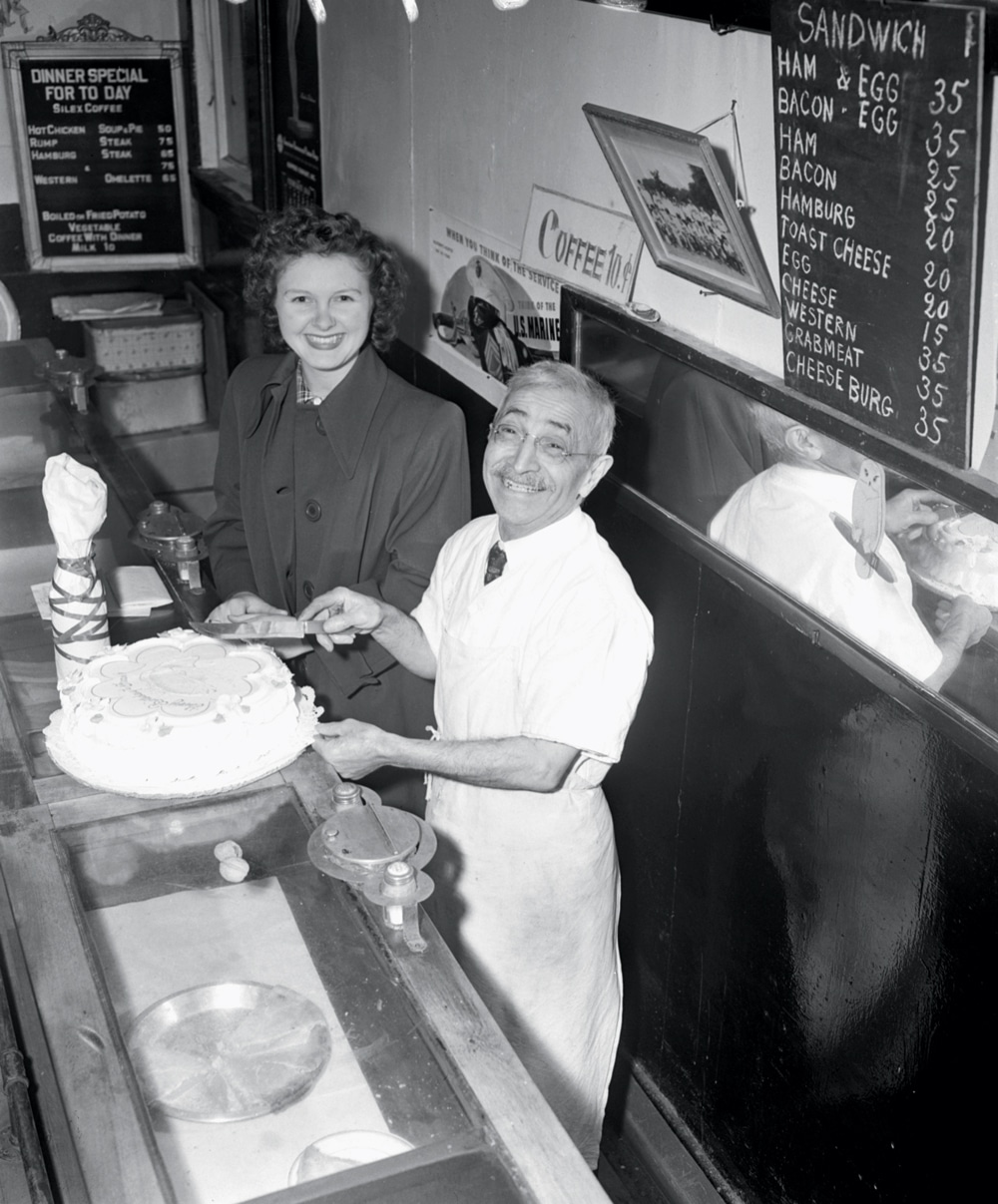 FEBRUARY 1950: One look at the joyful smile of Munjoy Lunch owner Frank Vartanian, shown at an 80th birthday party thrown by his customers and neighbors, and it’s easy to see why the man was so beloved during his three decades running the popular Congress Street diner.

There remains more to do. The Victorian railroad stations, houses and neighborhoods, repair shops, pastries, holidays, events, celebrities, relatives and friends, children’s street games, and big snowstorms are gradually being seen again. We have these worlds, and the more they inspire and instruct, the more they are worth cultivating and conserving.

Go to digitalcommons.portlandlibrary.com/pphnegs to see additional images from Abraham Schechter’s archival photo project. To read more of his writing, go to laviegraphite.blogspot.com.