Kinfolk Made a Magazine for Parents, and Yes, It Looks Really Nice

When you read the words “Kinfolk made a parenting magazine”, a certain image might come to mind: A mom and baby, both dressed in gauzy white, laying on a blanket in the middle of a field. A nuclear family making crafts around a vintage Quaker table. A photoshoot of a nursery filled with wooden toys. Since Kinfolk published its first issue in 2011, the magazine quickly established a visual shorthand for a very specific kind of tastefulness (minimalist, orderly, heritage) for a very specific lifestyle (millennial, aspirational simplicity, disposable income) that today nearly borders on trope. So now that its readers are getting older and having babies, what would the Kinfolk take on a child-focused magazine look like? It turns out, not all that much like Kinfolk.

Kindling is Kinfolk’s new magazine for “people with children.” The idea for Kindling started back in 2016 when Kinfolk bought the rights to the name from a magazine called Kindling Quarterly that focused on fatherhood. Kinfolk’s editorial staff had always entertained the idea of starting a magazine for parents, and when they saw the name they snatched it up for the moment when they could launch a new project. A few years later, the timing was right. The pandemic had slowed the pace of Kinfolk’s output, which meant there was time to explore a new title. At the same time, much of Kinfolk’s staff was aging into parenthood and felt like there was a dearth of content that addressed parents as both caregivers and individuals.

Kindling’s tagline hints at the driving editorial mission of the magazine, which is designed to speak to children, but is mostly for the adults who care for them. A spread showing a Venn diagram of items to take on vacation—a stainless steel lunchbox for mom, a Fjallraven backpack for the tot, and the Swedish game of Kubb for them both—succinctly articulates the magazine’s approach.

The aesthetics of idealized parenthood are unforgiving, generally unattainable, and frankly not all that relevant once you actually have a child in your home.

This hybrid, not-quite-for-kids, not-fully-for-adults mission mandated a novel perspective on Kinfolk’s traditionally staid aesthetic. Kindling shares some basic visual DNA with its parent magazine, but its creators made some deliberate choices to visually distance the two publications. Flip through Kindling and you won’t see many of the “lifestyle” images that made Kinfolk both famous and infamous as a beacon for an aspirational lifestyle. What you will see are goofy illustrations, blocks of bold colors, and playful use of shapes. “Design-wise, Kinfolk is an incredibly refined thing,” says Alex Hunting, whose studio designs both Kinfolk and Kindling. “With Kindling we’re taking a kind of naive and slightly DIY approach.” There’s still the regimented grid, the typographic clarity, and the stylish photography, but Hunting says he looked to childrens’ workbooks and scientific journals to give the design a playful, almost diagrammatic feel.

The design is meant to be a reflection of its editorial ambitions, which editor-in-chief Harriet Fitch Little says is to create a magazine that treats parents, or anyone raising a child, as a fully-baked human with their own sets of interests outside of their child. Kindling is an acknowledgement that caregivers’ identities are intrinsically tied to their children. But it’s also a reminder that childrearing can be treated as a lens through which people can view the rest of their lives rather than the defining characteristic.

Creating content around this subject can be surprisingly prickly, especially when it’s tied to the Kinfolk lineage, which as a lifestyle magazine with a look could engender many built-in assumptions for what passes as aspirational parenting. The reality is that the aesthetics of idealized parenthood are unforgiving, generally unattainable, and frankly not all that relevant once you actually have a child in your home. Still, it’s hard to not draw a direct line between what is perceived as good and thoughtful parenting and the media that supports that image, intentionally or not. Kindling is aware of that dynamic, and mostly successfully avoids it, as much as a magazine that’s designed to be beautiful can.

“If there’s an overwhelming thing we’ve tried to do with the magazine, and this sounds so basic, it’s to not make people feel bad. I just feel like a lot of content that relates to childbearing can, even if it’s intended to be sort of inspiring or motivating, actually be the opposite,” Little says. “I think you can definitely imagine a version of what a magazine like this from Kinfolk might look like, which might involve photoshoots of families or really nice displays of children’s rooms. We just didn’t want to make that.”

“I think you can definitely imagine a version of what a magazine like this from Kinfolk might look like…We just didn’t want to make that.”

A handful of features in the magazine veer into classic “lifestyle” territory—a beautifully shot spread of homemade sheet forts and a playful fashion shoot—but Staffan Sundström, Kinfolk and Kindling’s art director made the choice to focus on illustration rather than photography throughout the magazine as a way to avoid the self-judgement a photo can sometimes enable. He commissioned artist Espen Friberg to create a series of playful black line doodles that live across the cover and throughout the magazine. “This being our first issue we wanted it to have a strong visual theme that would flow throughout, so going with only one illustrator helped manifest the look we were going for,” he says. “I knew I wanted something that would work in full black (or one color). It needed to be funny and resonate with both very small children and still look cool to adults.”

The illustrated figure on the cover has become a sort of mascot for the magazine. It’s ambiguous shape (Is it a four-finger hand? A Thanksgiving day turkey? An amorphous creature with no name?) and deliberately messy execution is a good reminder that a magazine for people with children—and for children themselves—ought not to take itself too seriously. 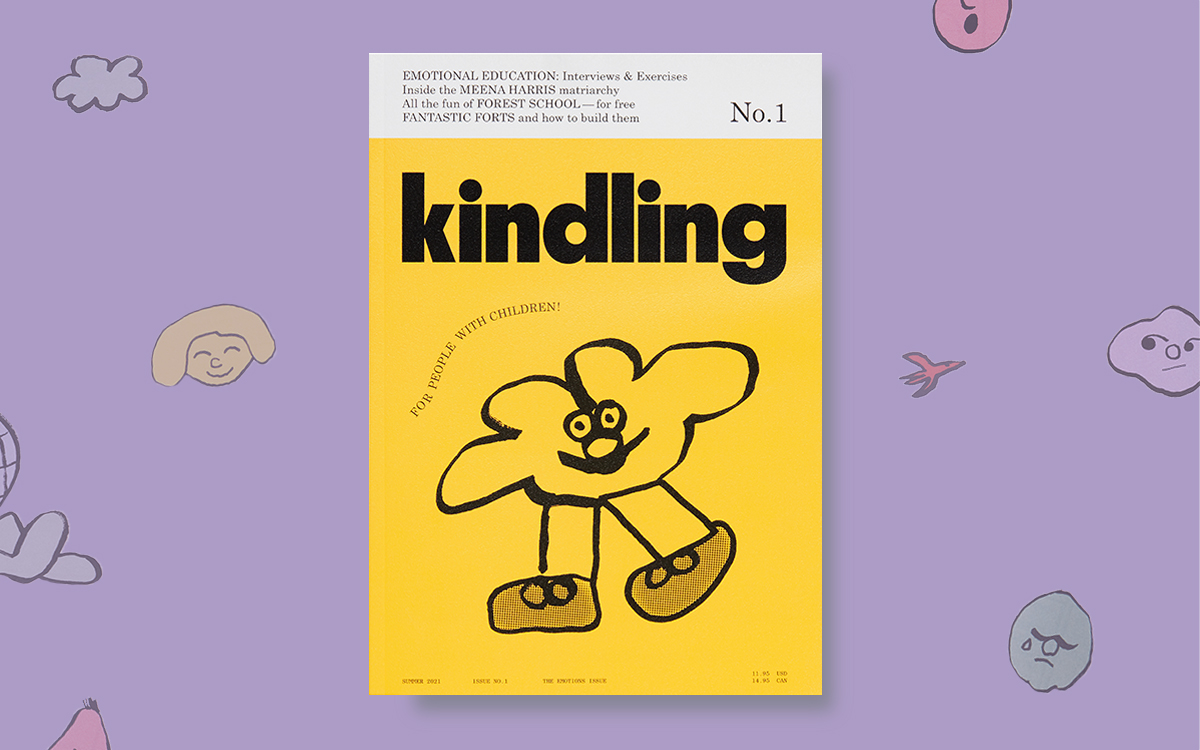