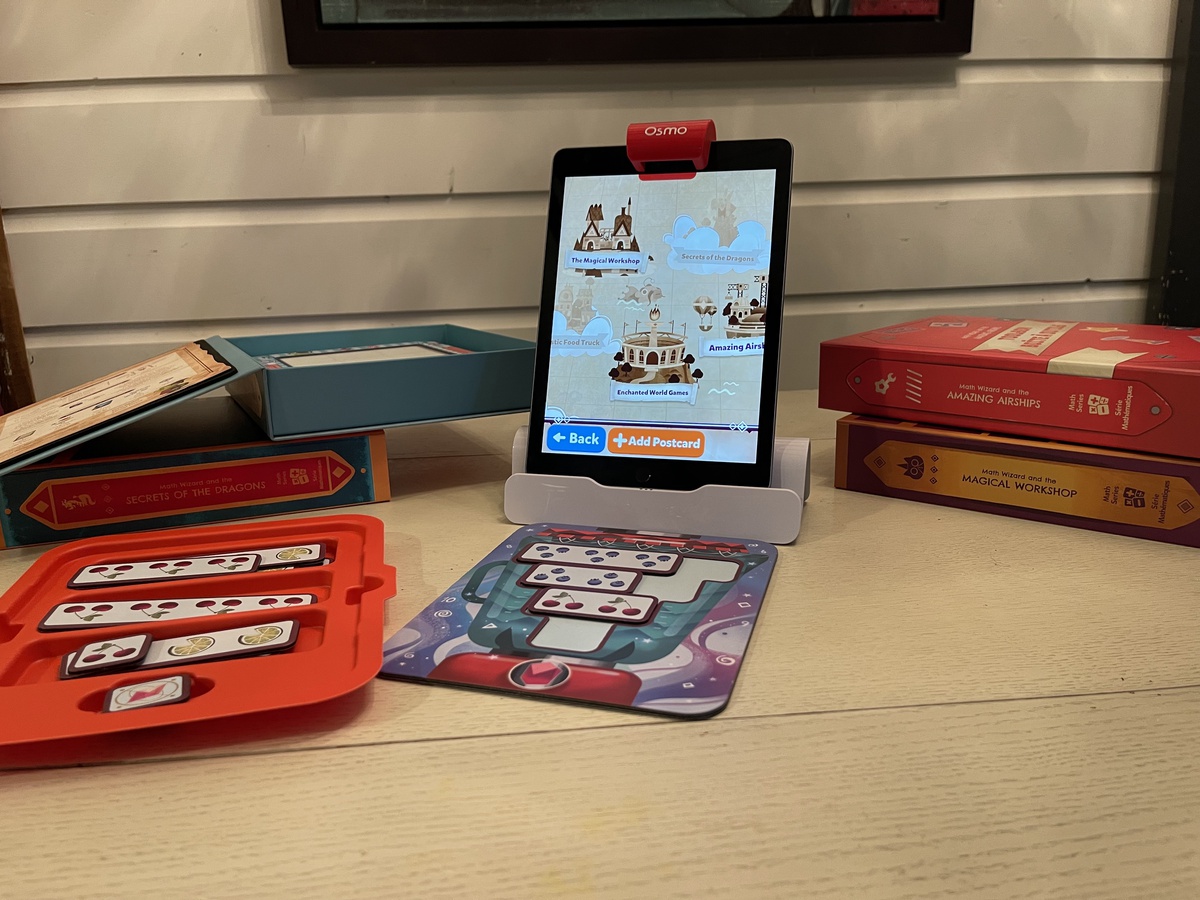 I’m a big fan of Osmo toys. I tested out the Osmo Genius Starter kit a few years ago and I thought it was fun to play, even for parents. The Genius kit is geared at younger children, and it’s so engaging they won’t even realize they’re learning as they play. When I was asked to check out the Osmo Math Wizard Series I was curious to see the difference between an Osmo set for younger kids and an Osmo game for children in grades 1 to 2. I’m happy to say it’s still just as fun, even when you’re learning what might feel like difficult math skills.

Here’s a look at the Osmo Math Wizard Series, a set of four games dedicated to teaching children aged 6 to 8 all about math concepts.

Start with an Osmo Base Unit 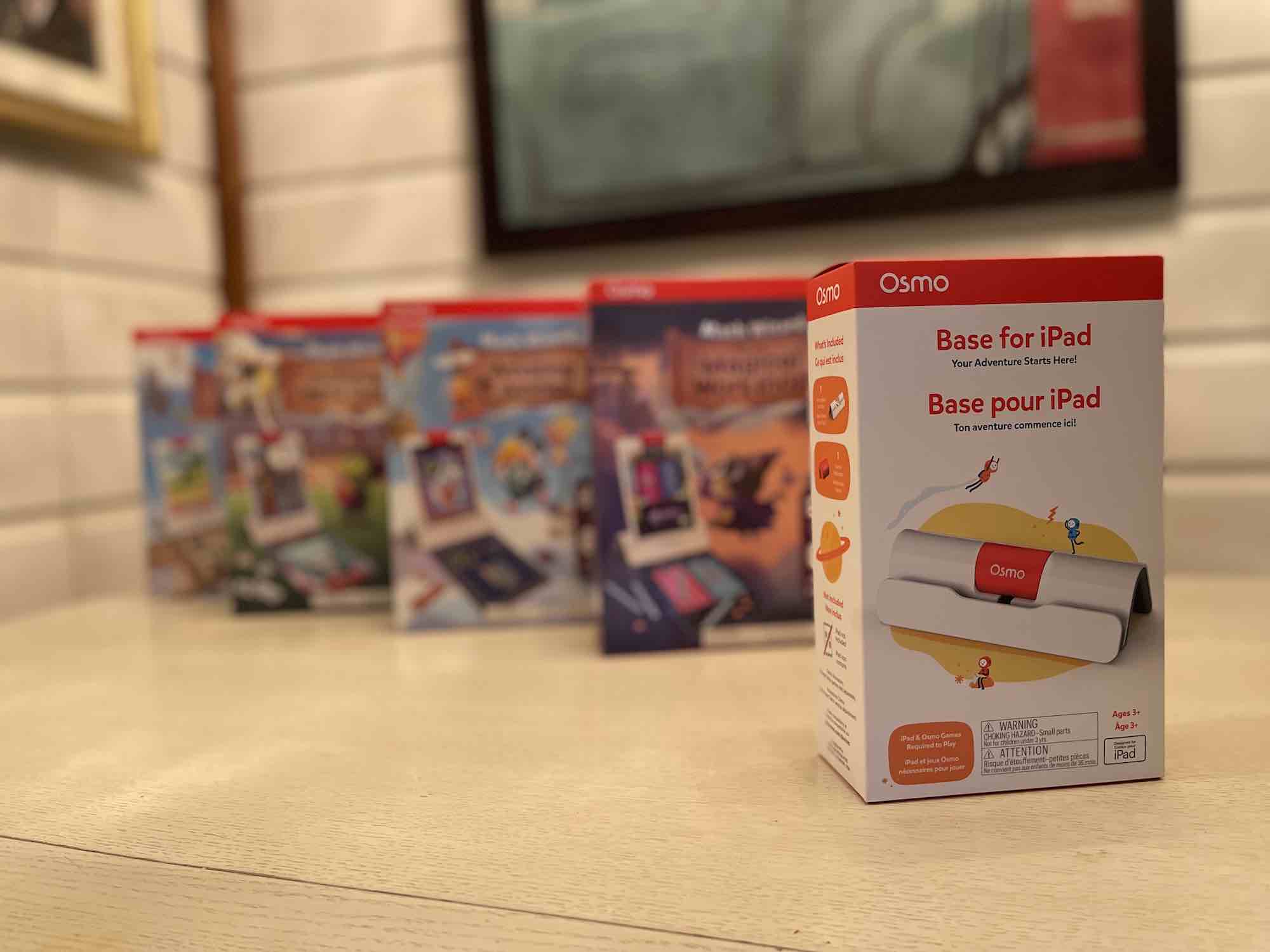 Osmo Base for iPad is compatible with all iPads except iPad Gen 1 to 4 and Gen 9. It also works with iPad Minis 1,2, and 6. You’ll need to update your operating system to iOS 10 to use Osmo.

I used Osmo Base for Ipad, and setting it up couldn’t have been easier. You just place your iPad on the plastic base and put the included Osmo reflector over your iPad’s front-facing camera. Once it’s set up your iPad can detect any Osmo game you play in front of it.

The Osmo Math Wizard Series includes five Osmo games. I was sent four to test out. Although my kids and I are older than the target audience, we had a lot of fun playing with them. There are so many games and so many skill levels, it will keep your kids entertained for hours.

Osmo Math Wizard Series prompts your child to use their foundations of math, so there is addition, subtraction, measuring, estimation, place value, and a lot more. Some games include rulers, while others include game pieces you stack to add, subtract, multiply, and divide. There is a daily reward chest your child will get for visiting every day, and you can even adopt a pet to play with and take care of. The pet lives at your Osmo home base and you can collect stars to interact with it.

Setting up your Osmo home base

When you start playing the games within the Osmo Math Wizard series you’ll be prompted by the intro screen to make a home base. Every time you get a new game you scan the included postcard and it adds the game portals to your base. Depending on the game you can have one, two, or several portals added to your game.

Your child will tap to place the portals anywhere on their home base, and anytime they want to play that game they’ll just need to tap the screen and open the portal. It’s very simple. Each game includes pieces that are like a board game, but they become interactive when you place them in front of Osmo.

You can start with any of the games in the Math Wizard series and add them to your Osmo home base so they are always available to play. 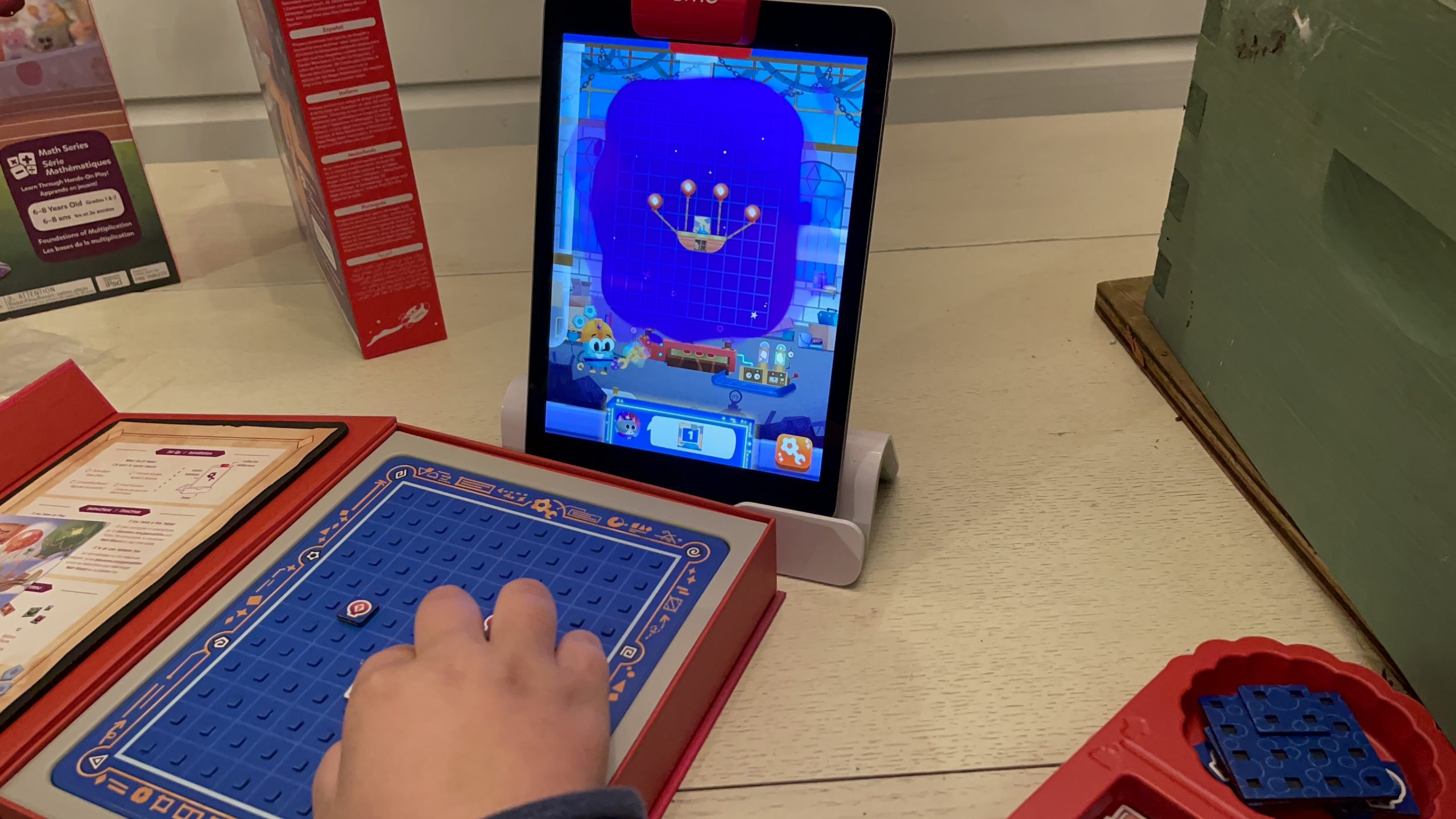 Osmo Amazing Airships is a game where Rupert the mouse needs to deliver packages to the islands of Spellbarrow Port. Using your Osmo base and the pieces in the Amazing Airships game box, your child gets to build airships and help him navigate through storms and winds.

Once you’ve added the postcard to your Osmo home base, the games within Amazing Airships will open. You place the game board and pieces in front of your Osmo. Using audio and video prompts, the game will teach your child how to use math to balance the balloons on the aircraft.

The gameboard for Amazing Airships reminds me of the board game Battleship. It’s a grid and the pieces have small cutouts to fit onto the board. The pieces represent ships, cargo, and balloons, and your child will place them depending on what the game asks them to do. The goal is to lift off, and your child can keep trying until they figure out the equation to get the airship in the air.

I really liked this game. The graphics are very eye-catching and it’s engaging. We really got into helping Rupert lift off, and it gets slightly more difficult as you play through the levels.

Math Wizard and the Magical Workshop take a different route to teaching math. With this game, you’ll brew potions and use sparkle dust. It has a very Harry Potter vibe to it.

When you open it up you see a box with pieces that create a magic set. There is a mixing mat with slides on the side so you can choose different objects. Objects include an eyeball, flower, feather, and mushroom. You will pull a spell card and use the included cubes and counting rods to create the ‘spell’ on the board in front of your Osmo.

I liked this game too. It’s mostly based on addition and subtraction, but definitely challenging enough to keep your children engaged in the game. You can make all types of different potions for each customer who shows up in your potion lab. 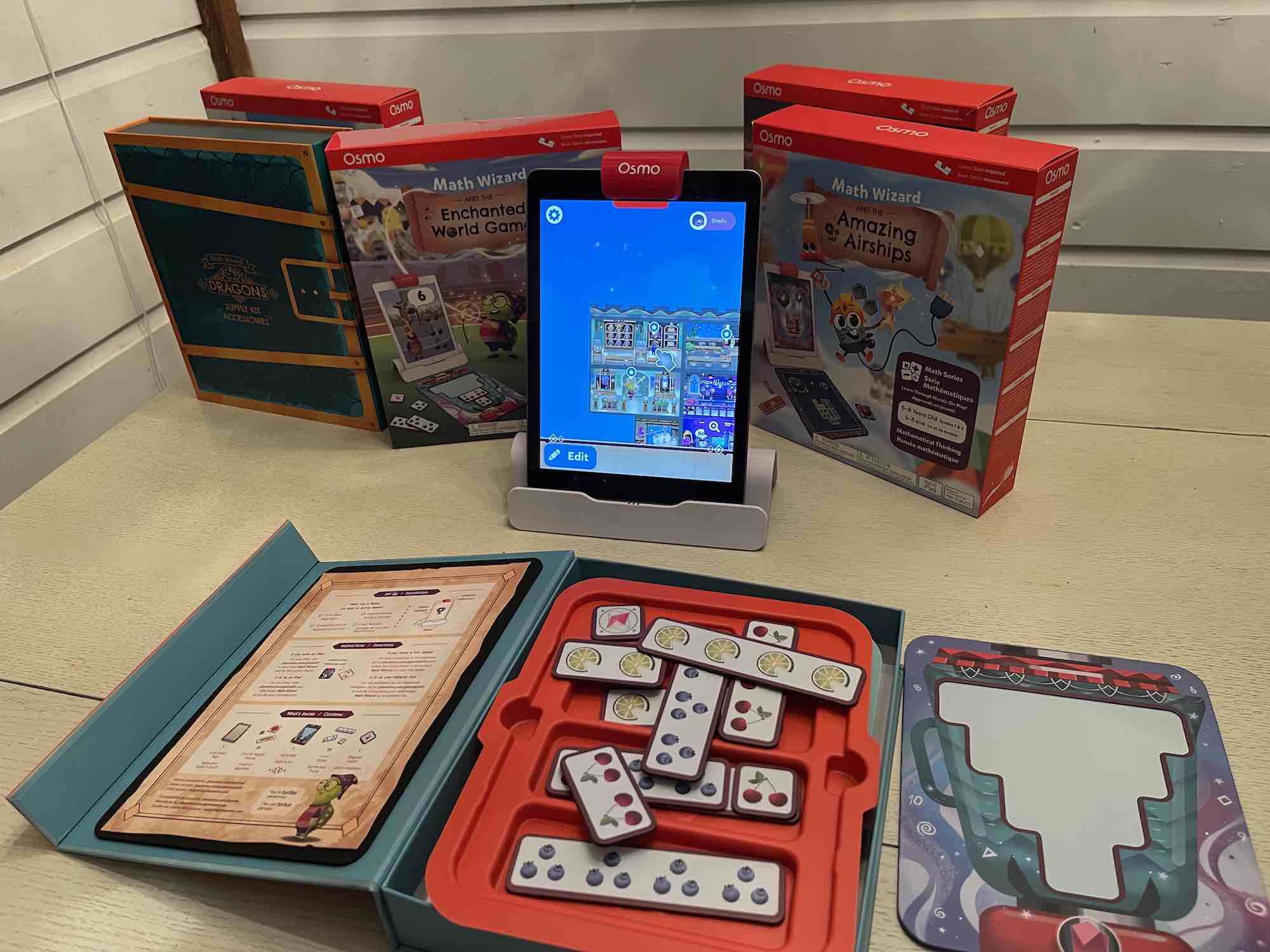 Math Wizards and the Enchanted World Games is set in Stadium Enchantium, a place where you are a mathlete. There are two mats included in Enchanted World Games, one Lunch Mat and one Juice Mat. You’ll use the pieces to figure out the answer to math questions asked in the online prompts. The Lunch Mat has a shape that reminds me a little of Tetris, while the Juice Mat is wide open.

Enchanted World Games teaches advanced addition and subtraction, and it ventures into multiplication as well. The goal is to fuel your team so they can win their events. You can create power meals or test out different fruits and vegetables to see if they will work for your team.

This game is visually engaging and it really makes you think about what you’re choosing for your team. Out of all of the games, this is the game that kept us busy for the longest.

Osmo Math Wizards and the Secrets of the Dragons 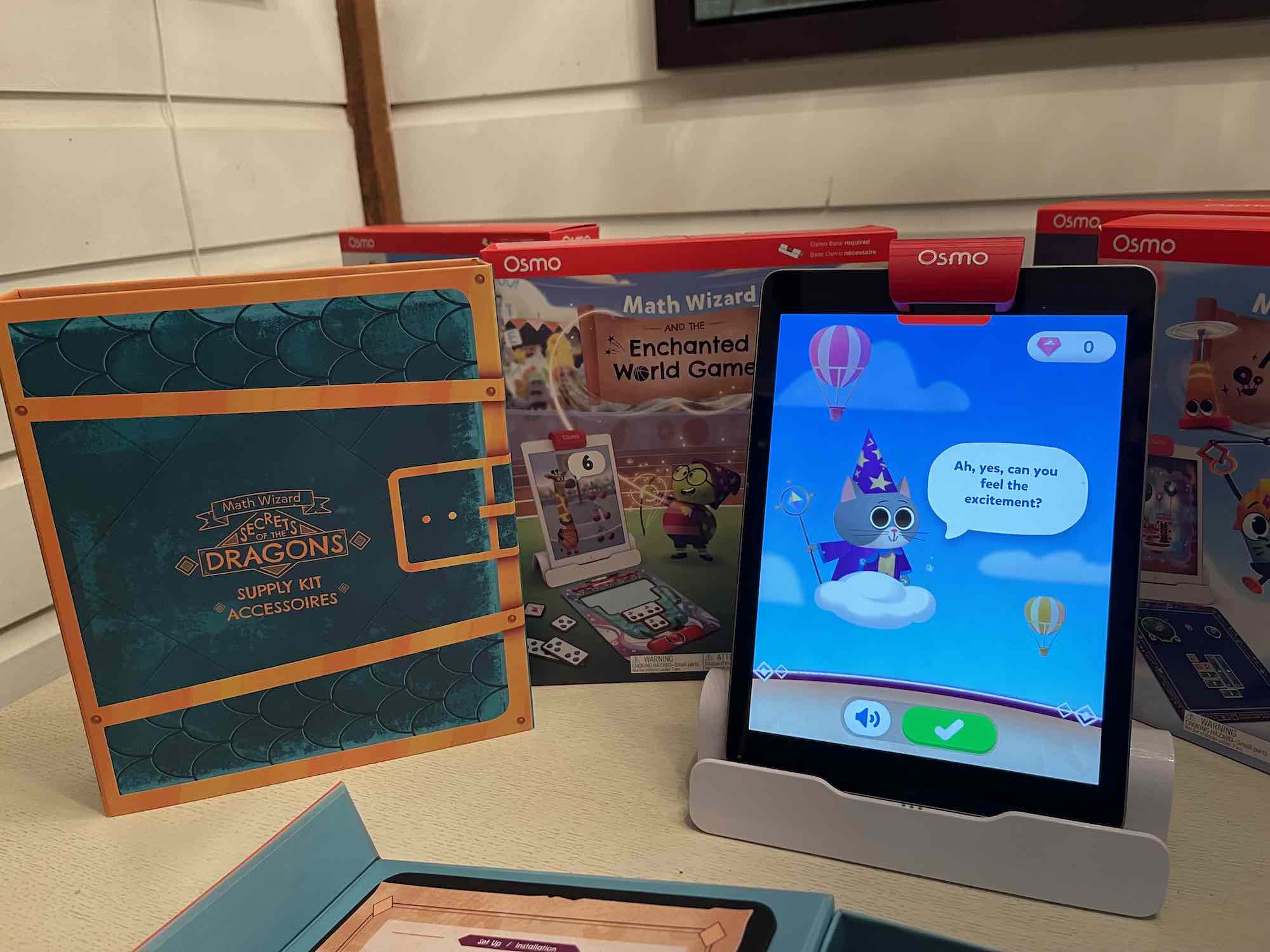 When your child is ready to branch out into measurements, Math Wizard and the Secrets of the Dragons is a great game to add to your Osmo lineup. Your child will get to explore the Dragon Reserve and complete a Dragon Guidebook. They’ll search for dragons and use the included rulers to measure and feed their dragons, estimating length, and watch them grow.

Playing Secrets of the Dragons is a lot of fun, and it doesn’t feel as though you’re learning when you play it. Kids will like searching for dragons, and there is a lot to find. You have to be very precise with the ruler, so it shows kids how you need to measure twice to be sure about your length. Feeding the dragons is fun too.

Games within the Math Wizard games 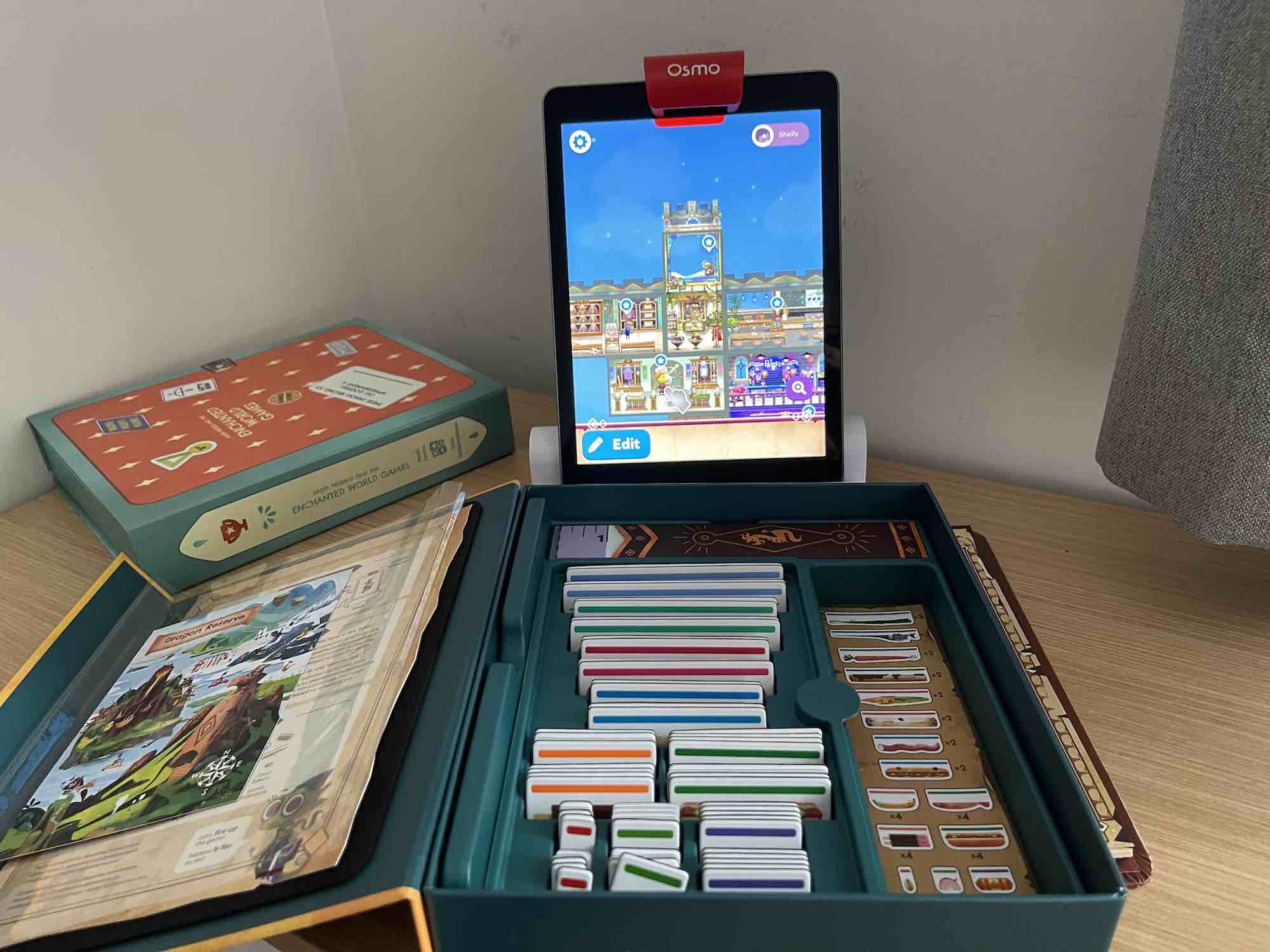 Each game stores neatly inside its own box, and the Osmo base unit is small enough to be stored in a drawer. The games are very easy to stack on a bookshelf to pull out whenever your child wants to play.

In what order should you use these games?

If you’re going to try these games based on advancing skill, Math Wizards and Enchanted World Games would be the third or fourth game I would add. Especially if you buy Osmo to help a child struggling with math, they’ll gain confidence playing Amazing Airships and Magical Workshop before they play Enchanted World Games. The Dragon Reserve is mostly about measurement, so it’s a nice add-on to whatever game you’re currently using.

Osmo Math Wizard is a lot of fun

Every game we played in the Osmo Math Wizard series was a lot of fun. They are very engaging, and I think the math skills your children will learn while playing will have an influence on their in-class math skills as well.

The way the game is set up makes your child feel as though they are entering a virtual world every time they play, and because the games are based on a reward system and include the care and feeding of pets like dragons and cats, your child will head back to the games over and over again.

The only thing we struggled with while playing was some of the on-screen instructions. You may need to be there to help your child figure out how to play some of the games. One of the reasons why they might struggle a bit is the natural tendency to tap the iPad to move the game forward. In some situations, tapping the iPad won’t help answer the question. All of the equations need to be worked out on the game board, so they’ll have to show their work to get the game to progress.

It’s nice to see Osmo will grow with your child as they learn new skills and take on concepts like math. You can find Osmo and all of the Osmo Math Wizard games on Best Buy right now.