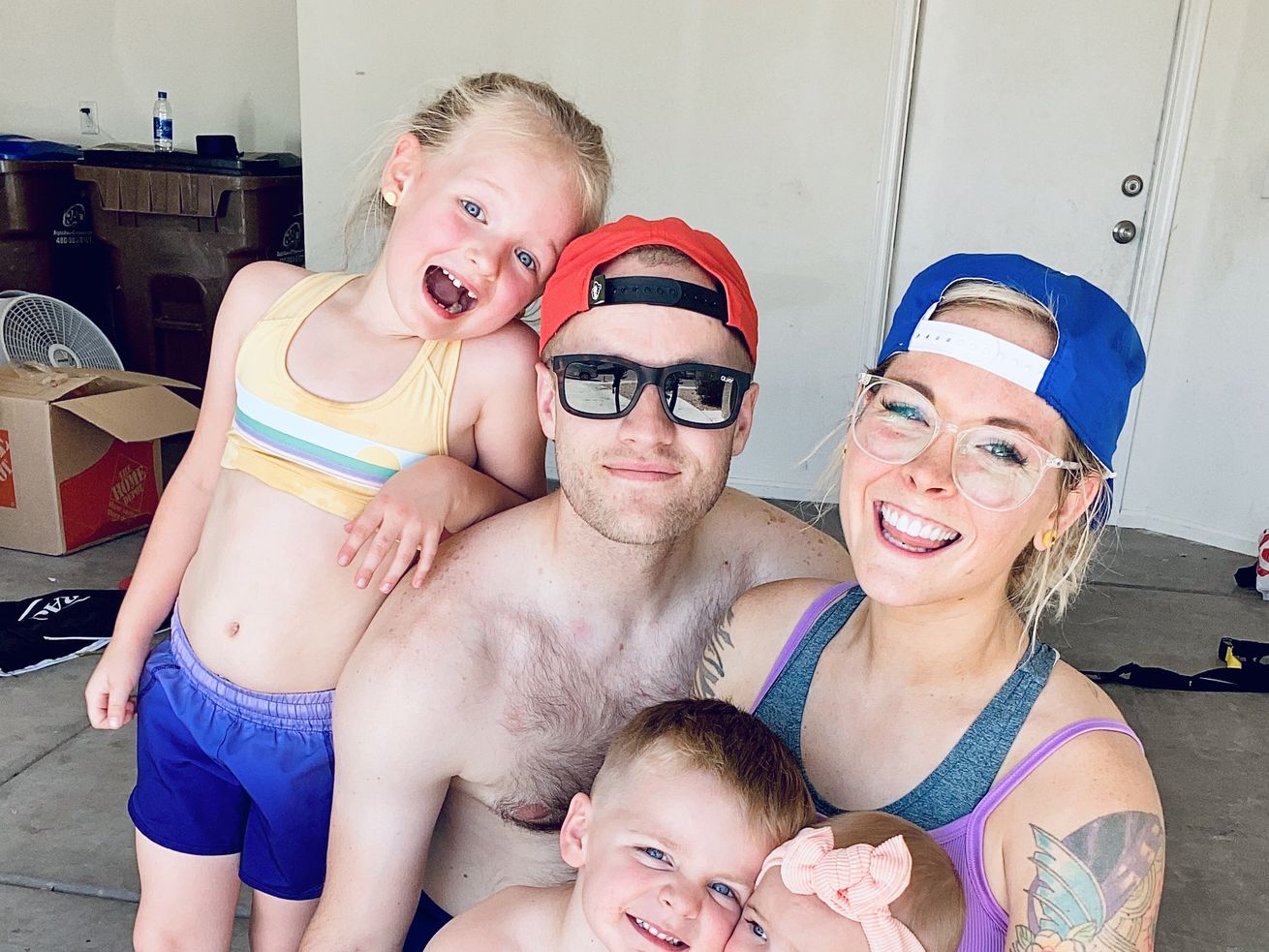 Al Carraway, her husband, Ben, and their three young children pose for a photo in the family’s garage. | Courtesy of Al Carraway

A speaker, writer and influencer balances her aesthetic of optimism against the challenges of the pandemic.

To post, or not to post? That is the question. Whether ’tis nobler to take to Instagram, with the standard pastels and adventure scenes, Or to stay hushed and watch while everything burns. Such is the theoretical dilemma of a social media influencer like Al Carraway, a mom with shoulder-length blonde hair, tattooed arms and almost 230,000 followers who look to her for hope as the pandemic rages.

Pause. It’s a positive thinking technique, a small part of her message.

Al converted to The Church of Jesus Christ of Latter-day Saints as a 21-year-old in Rochester, New York, setting out to disprove the missionaries until she “felt it” and joined them. Now, 10 years later, she travels across America and around the world to speak about trusting and loving Jesus Christ “in the hard, in the unwanted and in the unexpected.”

But by the end of March, she’d scratched out the rest of her 2020 planner. Talk about a pause. “I didn’t know my life without my planner,” she admits.

She can’t sit still, can’t waste a second. Stuck at home in Arizona, she wanted — needed — to do something. Anything. So she played “corona games” with her three kids. She raced her husband Ben down the stairs in a sleeping bag. She speed-chugged water. But by April, it lost its charm. “The hardest thing in life is passing time,” Al says. And she has nothing but time.

She’s published three books and also maintains followings on Twitter (34,600) and YouTube (37,000). Her brand is optimism, with vlogs, photos and commentary meant to uplift and inspire. Does that change when more than a hundred thousand Americans have died from a virus? Do adventure pics take on a whiff of arrogance, of disconnect?

But Al believes challenges should be confronted. “Being an optimist doesn’t mean that you’re happy all the time, or that bad things won’t come,” she explains. “It’s just the knowledge that when hard days do come, that it won’t last forever, and that better ones are coming.” It might leave a mark — like the “stupid” tattoos she got as a teenager — but you move on.

It’s a lesson easier preached than practiced. By May she’s approaching a wall. How long will the coronavirus last? What effects will linger? What comes next?

When thoughts like that creep in, Al catches herself — pauses — and leans on her faith. She tells herself “God is good, even when a situation is not.” That he is real. That he is involved. That nothing happens without him. That wishing for a bad situation to be over, craving a fast-forward button, is dangerous, because it’s a wasted opportunity for growth.

So she posts, even in her worst moments. She shares her family’s trials and triumphs, hoping to inspire. Not because it’s easy but because it’s hard. And she wants her followers to know that that’s OK.

She posts a photo of her family in the garage — her “sanctuary,” where they spend hours every day talking, playing and exercising. She’s in the best shape of her life, she says, and despite her extrovert tendencies, she’s realized she’s happy with an introverted life. “Take a step back,” she writes, urging her followers to admire parts of their lives they may never have noticed before the pandemic. “... Even the hard and the unexpected will seem exciting to us,” she writes. “And the overlooked and the mundane will seem vibrant again. Because this amazingly beautiful, messy, indescribable thing we’re living is something to never take for granted.”