What will an extended college football preseason look like for Utah State? 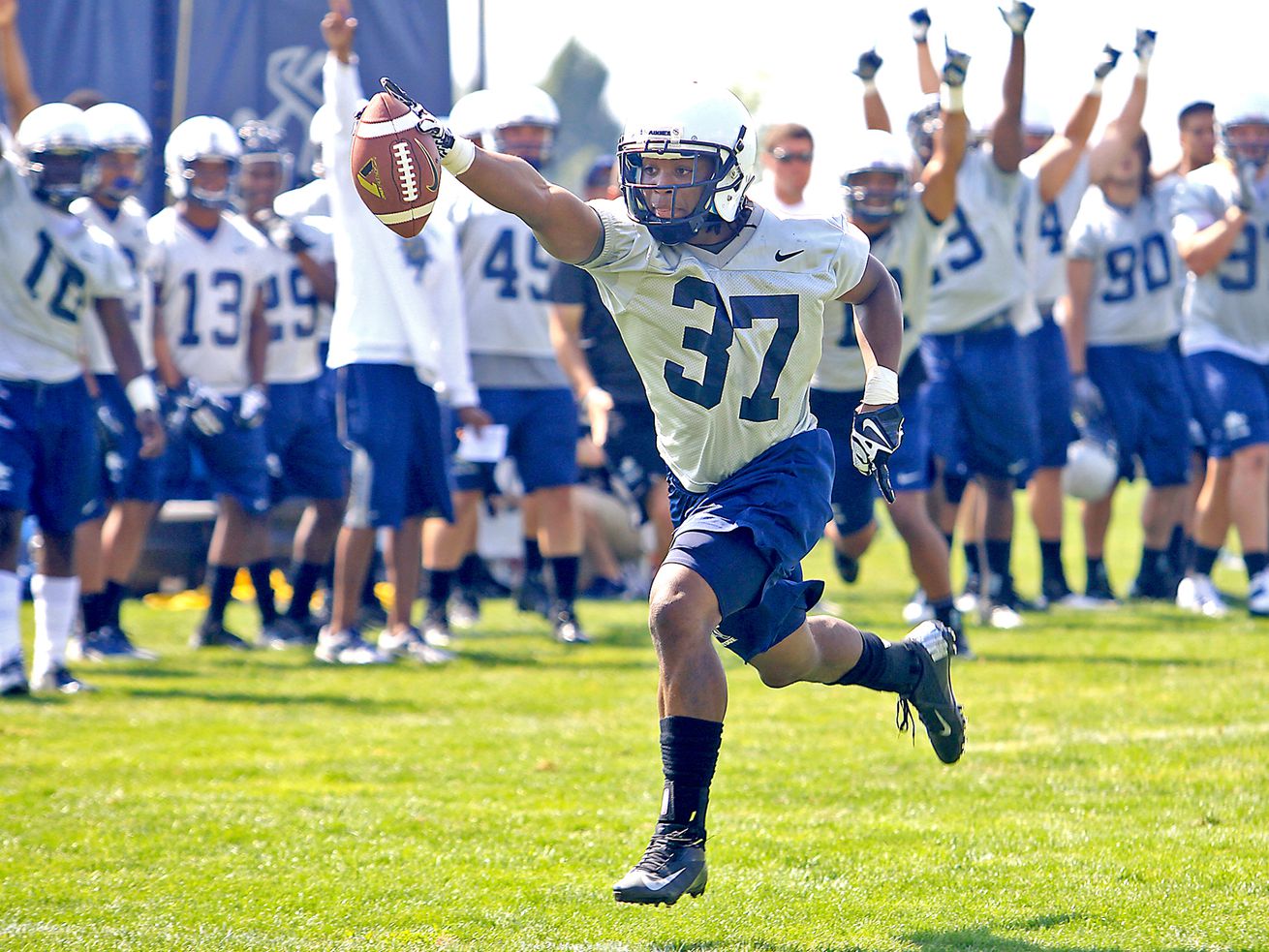 Utah State defensive back Devin Centers celebrates an interception to the cheers of his teammates during fall camp in Logan in 2016. A recent NCAA proposal for an extended preseason has been finalized and is expected to be approved, but no one knows exactly what it will look like. | Jeff Hunter

LOGAN — Late Thursday night, it was announced that the NCAA football oversight committee had finalized a plan for an extended preseason. It would include an additional two weeks for teams to hold walk-throughs, weight training, conditioning and film study — limited to 20 hours a week — in addition to the normal 29-day fall camp.

Multiple reports confirmed that the proposal is to go before the Division I Council, which meets on Tuesday, June 16, and by all accounts it is expected to be approved.

It is what everyone associated with college football has been waiting for, a firm set-in-stone ruling on the return of the sport. When it comes to the extended preseason itself, though, what exactly it will look like for Utah State — what it will entail — things are considerably less certain.

“It starts with their well-being from a social standpoint. Then that will move to football, secondly.” — Utah State co-defensive coordinator Stacy Collins

The Aggies have plans. Per co-defensive coordinator Stacy Collins, Gary Andersen and his staff have what amounts to multiple contingency plans for the preseason.

“We have multiple plans laid out,” Collins said, “depending on how much time we get with the guys and what that time looks like.”

Still, until the Aggies are back on campus, and even then, no one really knows what to expect.

“I’ll be completely honest with you,” offensive coordinator Bodie Reeder said. “I don’t know. I’m not sure what it is going to look like. I know there is going to be social distancing, as much as we can do, but when it comes down to it, football is a game of contact. That is what is going to be unique. There are people a lot smarter than me who are looking at those problems, but at some point we can’t social distance because we have to hit some people.”

“I don’t know,” Maile said. “I think that is the normal right now, to not know.”

Each of USUs coordinators agreed that whatever the extended preseason looks like, the priority will be as follows: First the athletes emotional well-being, then their physical well-being, followed by at long last, football itself, the installation of schemes and solidifying of depth charts — the normal fall camp stuff

“It starts with their well-being from a social standpoint,” said Collins. “Then that will move to football, secondly.”

With the COVID-10 pandemic ongoing and the Black Lives Matter movement taking root across the country, the welfare of the Aggies is foremost on the mind of the coaches, made all the more difficult by the fact that they cannot associate with their players face-to-face yet.

“Sometimes over Zoom you can’t really feel or see what they are feeling or what they are thinking about,” said Maile. “Some guys may have a hard time opening up. Not being able to see our guys in person and being around them, being able to hug ‘em up, that has been difficult. That is the biggest thing.”

Eventually, the Aggies will return to campus, though, and when they do, much will be focused on the physical. Conditioning isn’t a worry, per Reeder, but strength is expected to be problematic.

“I’m not worried about their legs,” he said. “Coach (Jordan) Hicks and the position coaches have done a great job staying on top of our guys. They haven’t been sitting on the couch. I’m not worried about their legs, I know they’ve been running. It’ll be about gaining back some of the strength that they would have gained in April and May. Getting them back into that regimen, getting back body weight, getting back their strength.”

Reeder expects the teams that will have the most success this year to be the ones that are the most physically prepared, since proper installation of offensive and defensive schemes across the country have been delayed for months now.

Because of that, there is a real danger in overworking players, something the Aggies’ coaches are concerned about.

“We have to take it one day at a time, make sure the kids are safe and that we are setting them up for success,” Maile said. “We have to try to not to overload them to make up for the lack of spring ball and a normal summer.”

Included in that idea is the installation of schemes, something that needs to happen on both sides of the ball for USU.

“We missed the majority of spring ball. We are still going to be teaching these guys a lot of the schemes that myself and Coach Maile and Coach Collins were going to try to put in this spring,” explained Reeder.

As far as success in that endeavor, Collins believes it will take a concerted effort on an individual basis by the coaches.

“I think this is where we as a coaching staff have to do a better job of understanding each of our guys individually,” he said. “What are their needs? We have to try to make sure we have done everything we can once this thing gets rolling so those kids are as prepared as they can be.”

And even then, players’ understanding of schemes might never get to where the coaches might prefer this season.

“Yeah. I think that is probably realistic,” said Reeder.

That isn’t to say it is all doom and gloom. Utah State has done everything it can over the last few months to stay prepared, via Zoom meetings, workouts and the like.

But while college football is about to get some real clarity in the coming days, what exactly the 2020 season will look like is still anyone’s best guess.