Why Taking Risks Is What Life Is All About 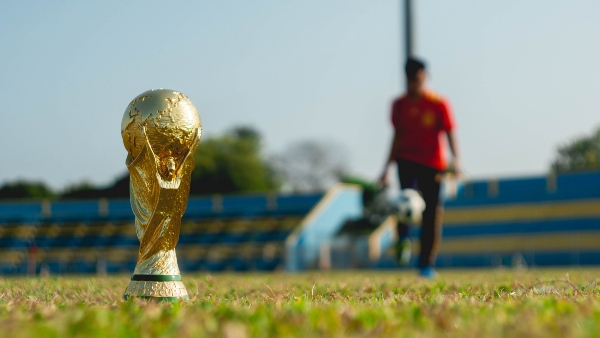 I know that because I was in the living room of the first house my wife and I owned together wrestling with the vertical blinds. I was trying to keep the sun off the television screen as I watched Scotland take on Brazil in the first game of the 1998 World Cup, in Paris.

Brazil were reigning World Champions, having won the Cup in 1994, making them the first team to win the World Cup 4 times, an incredible achievement.

For Scotland, a small but proud footballing nation, it was both a daunting prospect and an honour to be participating in the opening game in front of millions around the world.

As a Scot, I’d taken the day off in the hope that some form of sporting miracle would take place.

Scotland lost 2–1 and, ultimately, failed to get beyond their Group into the tournament’s knock out stages. A frustratingly familiar theme in Scotland’s World Cup experiences.

It would be 23 years before Scotland played in another major football Championship.

As I write, Scotland are about to kick off their Euro 2020 (delayed by Covid-19) Championship journey against the Czech Republic at Hampden Park in Glasgow.

As excitement mounts, I’ve been reflecting on how much life has changed since that June day in Paris 23 years ago …

The intervening years and the technological advancements made during them have been life-changing for industries, economies and people everywhere.

Here are the 5 Life Lessons that I would love to be able to jump back in time and give to my younger self.

1. Make health and fitness your #1 priority

In his mid-50’s and 10 years my senior, a friend of mine gave me a warning from the other side of the half century telling me to get in shape and make exercise a habit before I hit 50. He couldn’t point at any one thing, but all of his friends of a similar vintage agreed that something seems to happen to a man’s body on the other side of that line:

“It’s like a car — everything’s fine until it hits its 4th year, then the dashboard starts to squeak, the exhaust starts to rattle, you can see the dings in the paintwork more easily and repairs become increasingly expensive!”

Staying fit is less about looking good on the beach and more about keeping up with your kids, lifting them without wondering if your wonky back is going to creak, competing with them in the race along the beach and, in my particular case, still being able to drive the golf ball further than my son off the 1st tee.

In truth, based on the pace he’s growing and learning, I’ve got about another year before he’s not only blasting it past me, but hitting it right up the middle too. Nothing will make me happier, as long as he occasionally lets me win.

So … find your favourite form of exercise and people you enjoy exercising with and make it a habit. It’s the best investment you’ll ever make in yourself.

2. Never stop telling the people around you how much you love them

I was incredibly fortunate to grow up in the household that I did. I had an idyllic childhood, my parents nurturing my sister and I until we left home and, even if we didn’t acknowledge it, way beyond then too. In fact, Mum doesn’t know how to stop and long may that continue.

My sister and I were blissfully unaware of all the challenges our parents went through as we grew up.

All we knew was the constant encouragement to be good people, honest with ourselves and others and to be the best we could be at whatever we chose to do. We were always aware that not everyone had our advantages and to be grateful for the life we had.

Most of all, we always knew how much we were loved.

When we feel loved by the people closest to us, everything else sits on a solid foundation. Love and an appreciation of who we are provide an accelerant for our confidence, helping us take on the world and go after what we want to achieve with no second guessing.

So … have no regrets about telling those you love or admire how much they mean to you. They don’t need to be family. Don’t worry about being seen as insincere, or feeling foolish, an honest expression of appreciation is rarely unappreciated by the recipient.

Think about it this way … how often does unlooked for praise lift you and what does it really cost to pay it forward for someone else you care about and admire?

Photo by Victoria Heath on Unsplash

3. Don’t allow the day job to be all consuming

Continue to be curious about the new things that come along. Spend more time on and invest in learning about them without allowing an interesting day job to be how you define yourself. Working after hours at home because you’ve got a laptop won’t really make a great deal of difference in the long run. The energy and enthusiasm that comes from diversity of thought and experience outside, as well as inside, the confines of the day job is what differentiates individuals.

Give your brain the refresh it needs, seek out content and connections that you wouldn’t normally and check out what’s happening in adjacent sectors, especially in companies doing innovative things with technology, supply chains and system integrations.

The lessons from those early e-commerce platforms that were clunky and a bit of a pain in the ass to navigate and utilise is that they may morph into sector defining assets, where knowledge of how best to work with them will change the commercial landscape. Getting in early and growing with the platforms will create a highly desirable skillset and knowledge base.

So … don’t get caught in the trap of allowing the day job to expand to fill the space available. Get some boundaries in place and work as hard on learning about the interesting stuff outside the job as you do inside the job.

4. Take the career options that expose you to other cultures

Don’t give in to fear of the unknown and the ‘What If? Gremlin’ whispering in your ear about what you don’t know. Try to see it as an opportunity to learn and experience new things at a time when responsibilities are not what they will soon become.

Until you do learn, some of which will come from maturity and a healthy rear view mirror perspective, take some leaps of faith. There will be challenges, but the resilience that you’ll develop, the creative problem solving and global mindset that comes from those experiences are so worthwhile.

“Never let the fear of striking out keep you from playing the game.” ~ Babe Ruth

So … take a chance on those assignments, international or otherwise, that may be far from home and enjoy what you get exposed to on the journey.

Photo by Karolina Grabowska from Pexels

5. Invest early in a balanced portfolio

Ah, to have the equivalent of the Grays Sports Almanac that Biff Tannen discovered in the Back to the Future films. The book told him the results of every notable sporting event for years into the future. A risk-free, outsize and guaranteed return over many decades sounds very appealing doesn’t it?

A nice pipe dream, but in the real world, you must take some risk if you want to grow, regardless of the context. Financially, it can feel counter intuitive to risk what you have worked so hard to save, but if you want to at least protect the spending power of those savings from inflation, you need to make some of that money work for you.

That’s a huge difference, when you compare a 4X return for your cash versus losing around 30% of it.

So … take some balanced risk with that hard-earned cash pile, regardless of its size, hang in on the downturns and stay in for a longer haul.

In summary, because I know my younger self was even less patient than I am now:

This article is for informational purposes only. It should not be considered Financial or Legal Advice.Not all information will be accurate. Consult a financial professional before making any significant financial decisions.

You may also like these posts on The Good Men Project:

The post Why Taking Risks Is What Life Is All About appeared first on The Good Men Project.